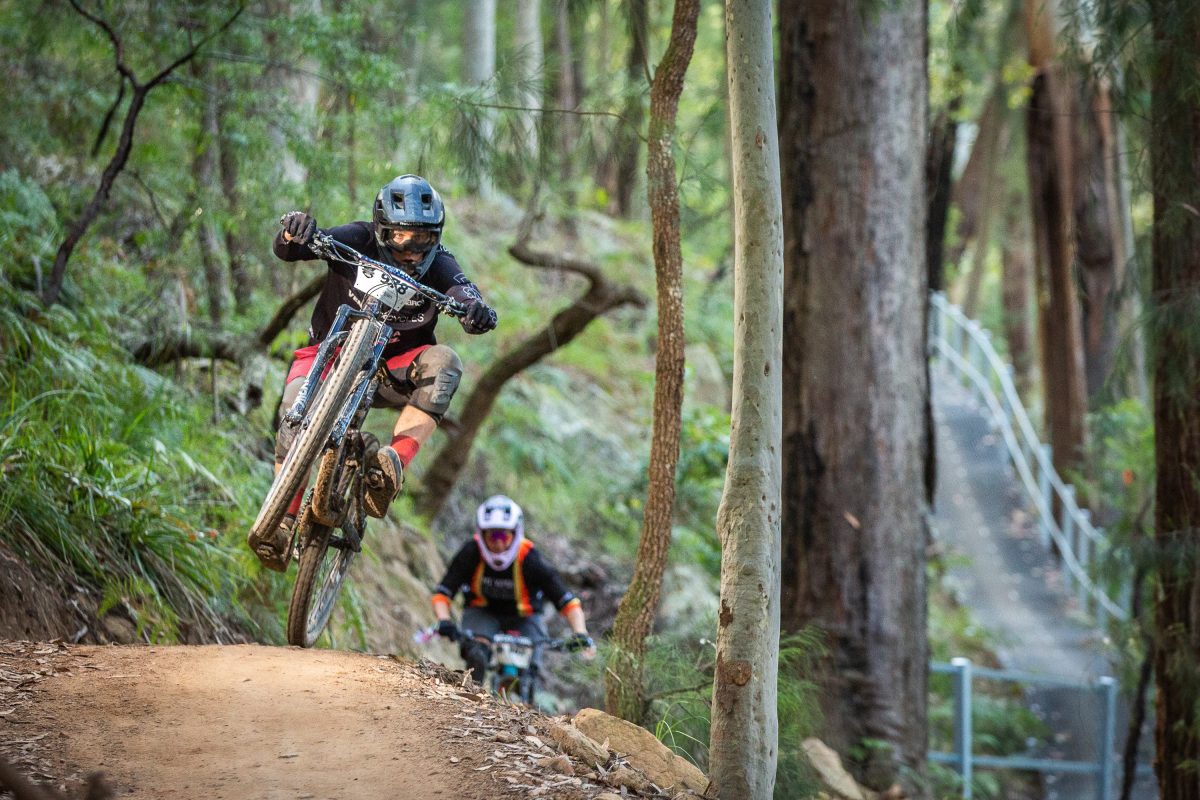 With a 12-year history Rocky Trail now offers regular events across NSW, in the ACT as well as QLD and events are planned for later in the year also in VIC. After an initial test event in November last year, this weekend will be a sell-out competition and attract local and out of region elite and casual race competitors.

“We are relaunching our racing season after an almost 4 month hibernation and we have put all our efforts into adapting and making changes to our operational procedures, which has been essential to getting the events industry back on track”, she said. “In order to bring our riders and spectators the racing action that they love, we are introducing new rules and regulations which make sure we all adhere to social distancing and gathering laws currently in place”, one of the Rocky Trail owners, Juliane Wisata, said.

“We still have very conservative self-imposed event participation limits in place, which are well below the Government and State Health authority regulations. As those laws tend to change quickly, and we will be constantly screening any developments – our racing rules will be a constant work in progress, and we will keep adapting them over the weeks and months”, she added.

High-profile line-up at Nerang this weekend

Rocky Trails says that over 300 racers signed up to be racing spread across Saturday and Sunday this quite the line-up of local guns and visiting racers from interstate! The fastest racers and Elite winner from last weekend’s first NSW event near Newcastle will be at the start. The U19’s racer Ryan Gilchrist clocked in the fastest time of the weekend on the Sunday – the Elite winner and second outright was none other than Jack Moir, who admittedly had tough wet and muddy conditions on the Saturday on his hometrack.

“It’s impossible to control the weather, so obviously not the way you would do it in a perfect world, but I think the organisers did an awesome job to get the race happening under the current circumstances. I was loving the rest of the setup, you get lots of riding in and can ride with your friends all day no matter what category they are in.”, said Jack Moir, one of Australia’s top and international acclaimed professional gravity racers.

Ryan Gilchrist from Bonville near Coffs Harbour in NSW is one of the up and coming gravity racers in Australia. He said beating Jack Moir had been a personal goal and that he was looking forward to this weekend to continue the competition by joining the Elite category. “I’ve raced XC and BMX in the past and enduro seems to be the best mix of serious racing and fun times with your mates. I was lucky enough to get the dry day (Sunday) which made the dirt a lot faster. Catching Jack was more of a goal than anything because I know that if he was racing in the dry he would have blown our socks off. That being said I’m happy with how I rode and I pushed myself to the limit and that’s what racing is about in the end.”

Local racers to watch will be Tobi Thompson who is racing for the Gold Coast MTB Club and said to be a “serious pinner” in the U19’s. In the Elites Australia’s endurance elite with Dylan Cooper, Andy Fellows and former national team rider Matty Vincent as well as the gravity powerhouse Joe Vejvoda will put their experience to the test and no doubt won’t leave anything out on track.

The event also expects a strong female line-up: Lisa Mathison is a 2x Junior world XC Champion 2002/2003 who represented Australia at the 2004 Athens Olympics. Lisa made a comeback as a Downhiller and is a regular top 3 at Nationals. Anna Beck is an accomplished local marathon and XC racer who has raced a few Gravity Enduro events and is seriously fast. Hayley Oakes is the current U17 National Champ XCO who comes from Northern NSW. Shaking it up not only in the SuperMasters 50+ among the females but also in the overall classification, will be Sharon Heap. These are her local tracks and she will be competitive for the outright female win! She is aWorld Masters Champ XCO, XCM and Runner up in Cyclocross as well as a DH, XC, 4X, CX National Champion.

With Jo Parker and Bob Morris Rocky Trail Entertainment is introducing a highly experienced local Outdoor Events Management team, who have been driving the expansion into Queensland.

“We are proud to lead the charge in Queensland for Rocky Trail Entertainment”, says Race Director Bob Morris. “In these events you can race the way you ride: this is friendly enduro racing without a tight schedule. Our racers ride to the starts un-timed and can pick the order in which to tackle the race stages, which makes this event social and action-packed at the same time! They can do up to five runs on each stage, the fastest one counts and there are no start orders, which means whatever category you’re in, you can ride together and still lock your own best race run in!”

Morris pointed out that with temporary COVID-19 event rules active, there was a participant limit in place and specific event health and safety regulations were available via the event website. The event is tracking all participants, which means that competitors must sign up and pay online. Every non-racing spectator or supporter must be indicated via that online registration process to reserve a race access pass at no charge. Non-racing event participants also include media and sponsor representatives, who are encouraged to sign up via the same online portal for an event village access pass at no charge.

Rocky Trail Entertainment is encouraging its visiting mountain bike racers to spend the weekend in the area and explore the Logan region with its variety of hotels, pubs and experiences to recover from the race and to escape the everyday grind.