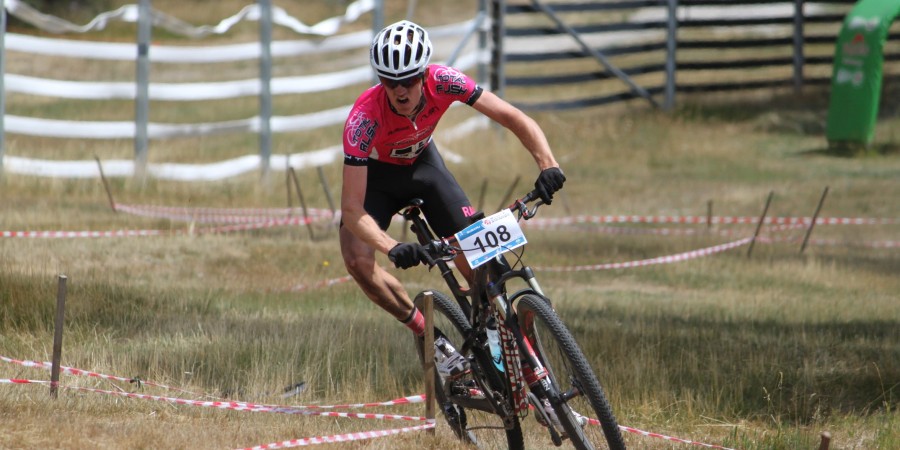 Michael Crosbie is a man with a special kind of energy. He is willing to give his all and not think twice about it. Whether it’s his youthfulness or the fact he’s making a living from his passion, you can sense this 21-year-old is destined for big things. With so much success already on his mantlepiece and the Glasgow Commonwealth games in his line of sight, how did it all begin for our Cyclist of the Month?

At the age of 10, Michael was riding an old style Malvern Star to and from school every day. From his house it was only 4 kilometres to De La Salle College in Melbourne’s inner South East, yet if Michael was wearing a Garmin, the screen would have been closer to 20 kilometres. Before school, Michael would meet up with his good mate Hayden Renshaw and they would detour to the Ashburton dirt park and pump out some laps before the first bell. I asked Michael, “wouldn’t you be late to school?” He laughed, and then responded, “we had a motto – start late, leave early”. The bike was his passion and nothing was getting in the way!

By the time he was approaching his mid teens Michael had built quite a network of cycling buddies and it was through this network that he fell into racing. At the age of 14 Michael got invited to the Westgate dirt criterions by a couple of older guys he used to ride around town with. These crit races, held under Melbourne’s Westgate Bridge, run pretty much all year around. The race is held on a 3 kilometre dirt course and is 3 to 4 laps, depending on the grade. Any bike will do, although mountain bikes are definitely recommended. Michael worked his way from C grade to A within 12 months, racing against much older kids and fully-grown men. Not long after making A grade, Michael was placing in the top three consistently, going head to head with the likes of Murray Spink, another Australian mountain bike marathon champion.

Despite all this riding and racing, Michael wasn’t thinking about riding as a potential career. He was just a kid doing his thing – riding the Yarra Trails, racing down at Westgate Park and wagging school a little here and there to get in some extra riding. However, in 2008 Michael got punched in the face by his potential.

Michael got the opportunity to go away with some guys he was racing with down at Westgate Park – it was the Bike Buller Festival and Michael would be racing in Men’s Open/Elite. As a carefree kid who just loved is mountain biking, he wasn’t expecting much, outside of a whole bunch of fun over a 3-staged event. In fact, he didn’t even have a mountain bike capable of riding the terrain, but luckily he managed to get his hands on one the Friday before the weekend event. Michael showed off his talent on the borrowed bike and finished third behind two much older and sponsored Giant Mountain Bike riders. I asked Michael if he was surprised at the result? “Yes”, he says, “although it was my dad who finally figured things out – oh, he actually can ride a bike”.  Michael’s dad (Tony) had always assumed Michael was a kid up to no good, riding about town, breaking bikes left right and centre. Michael and his dad now realised that he had a real knack for riding and the potential to go far in the sport. Skipping school to spend time on his bike was not because he was trying to break the rules, but rather because he couldn’t help himself. He’s genetically programmed to ride, and the will to ride over schoolwork all those years was there for a purpose. Welcome Aussie Under 23 representative…

In 2010 Michael was working as a metal worker in-between riding and racing. His boss at Bronzeworks, Anthony Caffry, was also a cyclist and mates with Simon Coffin, owner of Total Rush Cycling.  This was how Michael got introduced to “Pink” and a whole new world of cycling. Simon could sense Michael’s ability and offered him a position riding for Total Rush in the National Road Series. Michael had literally never raced road bikes before nor ridden one; yet unwittingly, he was about to learn thing or two.

Michael got all the preparation he needed from his new mentor: A road bike and some quality advice – “just suck the wheel in front of you”, said Simon Coffin. Michael was ready to go. He rode in the Tour of Gippsland, the Tour of Geelong and the Tour of Tasmania that season. He survived them all and supported his fellow teammates, but most importantly, got a real taste of what it was like to hurt! Michael had never been pushed like this before and riding with professional cyclists showed him what it was like to ride against guys who train for a living. He also experienced some of the most extreme weather conditions, particularly in Tasmania where he caught hypothermia after riding in the snow for three days. While incredibly tough at the time, this stint in the National Road Series made Michael stronger on the mountain bike.

In 2011, Michael got picked up by the Elite Development Program (EDP) set up by the Australian National Mountain Bike coach, Chris Clarke. The EDP was made up of four first-year Under 23 riders. This gave Michael the opportunity to race in Europe and ultimately provide a path for him to compete in the World Cup and represent Australia. While the results from the team weren’t too favourable at their first attempt, Michael and the team got a real eye opener, with incredibly technical courses and some unbelievably strong riders. One of the World Cup races that year was in Germany and there was a vertical drop of 4 meters called “Wolf’s Drop”. When Michael first saw the drop, he was literally in tears about having to ride the course, and ended up spending more time on his backside than on the bike. However, to be fair, one of his ventures into a ditch was not course related – it was a wild deer knocking him out of the saddle!

Michael’s experience in Europe has not deterred him from pushing himself even harder in the saddle. Highly technical courses, wild animals and very strong riders equalled a great experience and something that has made Michael a more complete rider.

Between 2011 and today, Michael has picked up a number of wins and places throughout the MTB national series, won two consecutive Under 23 King of the Mountain road jerseys (2013 and 2014), has represented Australia at the Word Championships and has had a ton of fun doing it all. Currently he rides as a privateer representing Total Rush and has ambitions to represent Australia at the Glasgow Commonwealth Games, with the Olympic Games firmly in his sight too! After speaking at length with Michael, you can really tell how much Total Rush has influenced his career and how much gratitude he has towards Simon Coffin and the team.

At the end of the day, Michael rides because he loves it. “It’s the freedom and the fun that makes me never want to stop”. With a promising future ahead we should all keep an eye out for Michael at the upcoming Commonwealth Games – hopefully the first of many. If you want to follow Michael on his road to success you can keep track of him via his blog http://michaelcrosbieracing.blogspot.com.au/.

Did you find Michael’s story inspiring? Tell us what you think below!