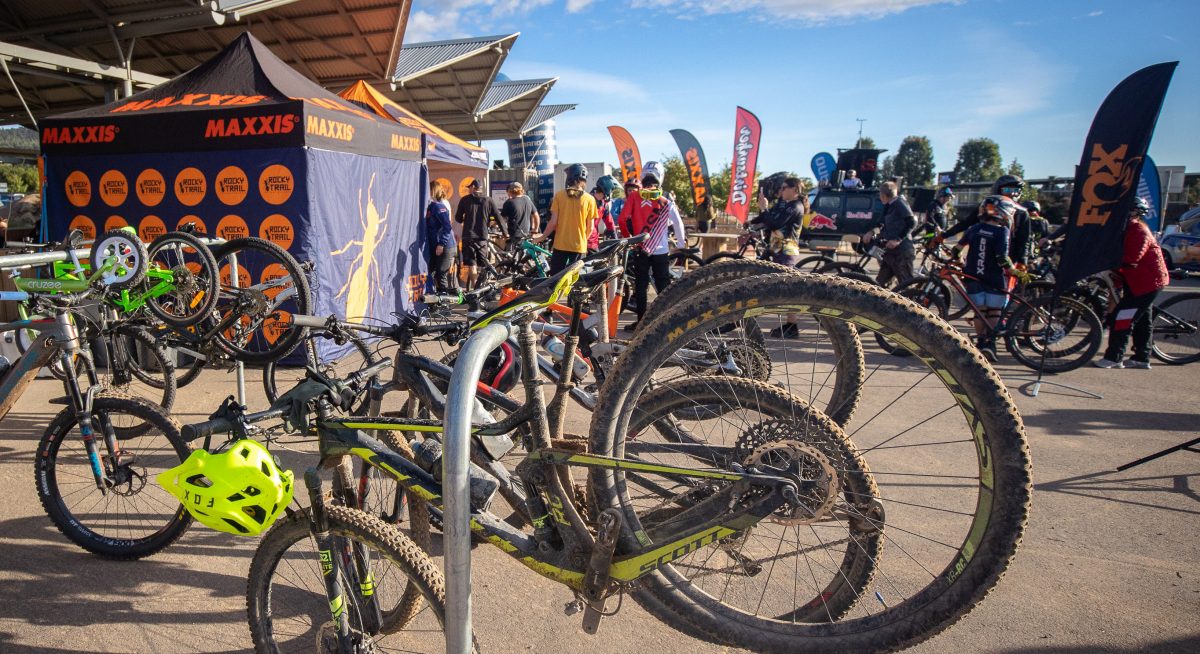 Over 600 racers participated in the popular gravity enduro mountain bike race with Rocky Trail Entertainment in Canberra on the weekend. Supported by Events ACT and Visit Canberra the Fox Superflow sealed by Stan’s race was split across two race days and the riders had three race stages on offer with neutral transition rides in between. With 15 possible race runs the fastest time on each race stage counted and the outright winner was Elite racer Ryan Gilchrist from Coffs Harbour with local rider Zoe Cuthbert taking the female win.

The Fox Superflow sealed by Stan’s at Stromlo was an event of superlatives. The race not only attracted the biggest participation in the 13-year history of Rocky Trail Entertainment over the weekend, but also the largest junior racing crowd with over 200 competitors under 17 years old.

Race Director Martin Wisata said, “With the Fox Superflow we are offering a challenging gravity enduro format, which tests not only the technical and tactical racing skills of our racers, but also their endurance – our outright winner recorded six time race runs with 1,000m of climbing over 30km of riding on the Sunday completing two timed runs of each of the three stages.”

The racing format was now being delivered across NSW, QLD, VIC and with rising participation numbers a second Stromlo race was scheduled for September this year, Wisata confirmed. That event was going to offer another three race stages different from last weekend.

“We were all very impressed by our racers’ enthusiasm and determination at Stromlo – this type of racing takes a lot of experience and it’s exciting to see so many young racers taking on the challenge – the future of superflow and gravity enduro racing certainly looks bright!”, Wisata said.

Ryan Gilchrist from Coffs Harbour and Zoe Cuthbert from Canberra are the Elite male and female winners of the Stromlo racing weekend. For both it is a consecutive victory after the first Fox Superflow event on the NSW Central Coast in February, which makes them the male and female outright elite leaders in the NSW/ACT series.

Gilchrist clocked in a race time of 8:16.9 and said it had been a tough race, but that he had enjoyed racing among a great crowd, “I pushed really hard and stole some KOMs [King of the Mountain status] at Stromlo. Also discovered the delights of the party pain train racing at the Fox Superflow.”

Zoe Cuthbert, one of Australia’s brightest mountain bike endurance racing talents, finished with 9:15.2 and agreed, “Awesome racing conditions and stoked to see so many people out racing on my home track.”

Canberra local racer Yuta Leffers came in second in the Elites and outright in 8:41.0 with a gap of 24.1sec behind Gilchrist. Fellow Canberran Mario Baldwin was third by just one second.

“Make it your own adventure”: Fox Superflow

Some riders refer to it as “friendly enduro racing without a tight schedule”, some say they love the flexibility and live timing and many come, because they can ride with mates and the whole family. The experienced and Elite racers can push hard in a competitive field, punch out up to 15 race runs and the nature of the format allows them to enjoy a unique social aspect, spending a whole day out with mates, regardless of what race category they are in.

However, since its inception in 2012 the Fox Superflow has also been able to foster grassroots enduro gravity racing in Australia by attracting huge junior fields whilst harnessing the masters 40+ riders, the two dominant demographics at Stromlo on the weekend too.

Wilkin Payens from the Blue Mountains is one of those talented races who has established himself in the overall results lists of Rocky Trail’s Fox Superflow events over the past few years. The U17’s winner at Stromlo placed fourth outright with 8:42.2 and said,

“Had an amazing weekend down at Fox Superflow Canberra with great weather and I had a new bike, which like a rocket ship”, Payens said and that he was gearing up for the Awaba event near Newcastle in April already. U17 second-placed Taj Carter-Smith from Sydney placed ninth outright.

The sensation of the weekend was U15’s female racer Elleni Turkovic from the Northern Beaches in Sydney. With a race time of 10:06.0 she placed third overall in the female field with a gap of behind the Elite racer Cuthbert and Alysha McNee (+41.8sec). With her dad shadowing her on the trails, she completed five race runs, placing in the midfield outright. “We ride a lot of our local trails and she’s a really good technical rider”, Elleni’s dad said of his talented junior and dad she “loves to jump”.

The next Fox Superflow events will be the Silvan event in Melbourne the weekend after Easter and the Awaba round in NSW near Newcastle, which will offer EWS (Enduro World Series) Points to Elite racers a week later.