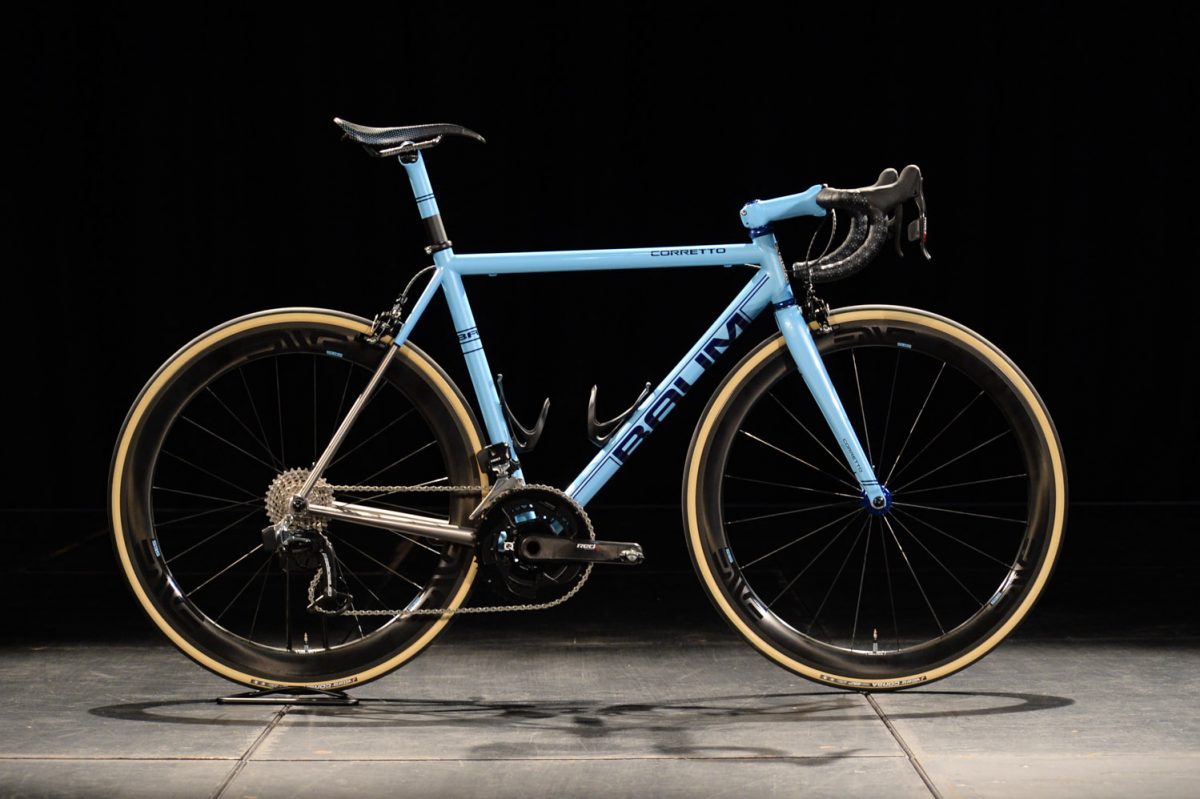 In this article and video I will outline the custom bikes (Road, Touring, Cyclocross and Mountain) that were on display at the recent Handmade Bicycle Show. I will also make an analogy to the local Australian beer market, which I believe is a comparable market when you consider the demographic and the love and passion producers have for their craft.

Additionally, I’d like to ask you to leave a comment below outlining which bike/brand you liked the most, and why.

Reason being, I’d like to approach the maker of the most popular custom bike/frame – as directed by you – in order to piece together a comprehensive review of that particular bike.

But before we get into this piece, let me explain my analogy.

What on earth does beer and cycling have in common?

Well, if you ask Ashley Bleeker (Managing Director) of a BLOC, he’ll tell you there’s plenty! They have a post-ride recovery beer that is made with alpine minerals; the perfect hydration treat after a ride.

But in addition to that, let’s quickly break down beer and cycling and why I think they’re worthy of being together in this article.

What they have in common:

There’s no doubt that the beer market is ahead of the cycling market when it comes to craft/boutique operators.

In fact, looking into this NAB report, craft brewers totalled 30 in 2006 and today that number has grown to 420! That is massive.

Additionally, 1 in every 10 beers sold today is considered to be craft beer – so 10% of the beer market – and the experts are saying that number will double over the next 10 years.

Lastly, on the beer topic – while the overall beer industry is in decline, the craft market is growing rapidly.

Is this an indication of what will happen in the bicycle industry?

I’d love to be able to share similar stats with you on the bicycle market. However, after working full time in the cycling industry now for over 12 months I have learned that comprehensive statistics, let alone any reasonable data, is difficult to find.

So, let’s have a little think about this. You know, good old fashioned common sense.

If you’ve been into cycling for a while, have a think about the custom bikes you were privy to 3-5 years ago.

If you’re a local, Baum will probably come to mind. Anything else?

Fast-forward to the Handmade Bicycle Show in Melbourne on the 27-29 April 2018 and we had 21 producers on display.

And reading many of the producer signs at the Handmade Bicycle Show, a big number state their beginning as 2015, 2016 or 2017!

While I’m conscious that most brands aren’t overly prevalent yet; consider Curve, Bastion, and Prova as examples of boutique bike brands that are becoming more mainstream by the day.

It was also interesting to speak to Bikes By Steve. We did a story on Steve in late 2017. At that stage Steve was acclimatising to leaving his job earlier that year and taking on bicycle frame painting full time.

Well, fast forward another 6 months and Steve’s business is about to make a big step in the growth direction. He has plans to move out of his current home set up and into a facility in Abbotsford.

Another signal of this custom bike phenomenon.

In addition to these growing boutique operators, the Custom Bicycle Show still had it’s fair share of smaller operators, who love the bicycle and make frames as a hobby outside of their 9 to 5. ‘Richard Walker’ and ‘G.Duke’ would be examples of this.

So without further ado, here is a guide to the most epic Handmade/Custom Bikes here in Australia:

Definitely the most known name in the custom bicycle industry and a leader in the market. Owner Darren Baum often receives a surprised look from onlookers, given his age. People expect a crazy old frame maker (perhaps a little like the Doc from Back to the Future), but instead they’re greeted with a fresh faced Victorian who’s been building custom Baum bikes since 1996, He’s had Cadel Evans thank Baum “for the work they’ve done together” and they’ve even been featured on an Australia Post stamp!

Roughly 8 years ago Curve Cycling was born out of passion from two BMX buddies, Jesse Carlsson and Steve Varga. They initially started in wheel building, but over the years have developed into a fully fledged adventure cycling phenomenon. Their bikes are produced from the need to tackle some unique or incredibly monstrous ride, and once that ride has been identified, the bike comes next. Not before!

From artist and designer, David Murphy, these frames are made from sustainably grown Australian timber, reinforced with flax while using superior qualities inherent with marine plywood.  The wooden look and feel is certainly a unique proposition, for those who are accustomed to typical materials – which is most of us – however Damu and other wood inspired frame builders are very clear on the quality of ride and handling performance.

Check out their video:

Sean Doyle started Devlin a few years ago off the back of 30 years of cycling experience. Riding and racing in the 80’s when steel lugged frames were the norm, Sean developed an affinity for the material and now builds mostly with lugs, and in his words this “gives the opportunity to add subtle flair to a frame”. There is also a uniqueness about the way steel feels on the road that drives his bias towards this material.

Geoff Duke has a background in both tool making and road bicycle racing, and he’s spent many years doing both. With a very close connection to the process, Geoff prefers traditional techniques such as using a hacksaw and file instead of  machinery. In addition to building the frame Geoff gets involved in the sourcing side, if customers are looking for unique retro parts to go with the complete build.

From racing motor bikes to studying, and then having a career in mechanical engineering – including roles at Holden’s engine plant, Ford and Toyota – when Ewen Gellie took on custom frame building in 2006 he had the ideal CV. For Gellie, it’s now all about bespoke engineering, building from the best butted steel bicycle frame tubing in the world (Columbus and Reynolds).

Established in Canberra in 2012, Goodspeed offers custom handmade steel bicycles. Their design and tubing slops make their frames stand out from the crowd. The frames are manufactured or full bikes assembled by four brothers and a few good mates. They are all about meticulous craftsmanship and stunning design.

For HTech it’s all about bridging the gap between performance carbon frames and modern wooden frames. They use a blend of carbon fibre and wood to create their own bespoke wooden frames. They say a wooden frame like this provides the ultimate ride – stiff, compliant and comfort, all wrapped into the one bicycle .

Run by Keith Marshall out of Canberra, this one-man frame workshop is all about about custom steel bicycles where classic style meets modern function. The below touring bike was perhaps the standout from the crowd at the recent Handmade Bicycle Show. A masterpiece of touring and commando styling!

The creator behind these frames is Darrell Llewellyn McCulloch. The philosophy is all about blending the merits of traditional lugged construction with the very best of contemporary design. Darrell says his materials create functional, rationally designed bicycles, with the end result being excellent aesthetics and a strong build that will go the distance.

Mooro – an indigenous name from the Perth region where these bicycles are made -are makers of titanium frames. They custom fit the rider and their riding style using techniques and methods that have been learned from co-creator, Chris, who’s also a chiropractor. They use their knowledge of the body, interest in geometry, and how it influences the riding characteristics to design a Mooro to suit you.

With a family history of car building, Mark Hester – Prova Cycles creator – went to university to study Mechanical Engineering. Mark’s final year thesis at uni was the design and manufacture of a carbon fibre monocoque formula chassis. This experience in composites led him to being employed by Prodrive Racing Australia. Years later and Mark took this engineering expertise into frame building.

Richard has been building custom steel frames for years as a hobby. The design has retro in mind and Richard also builds wheels, either separately or as an addition to his custom built frames.

You’ve got to love this: on the Stoemper home page is says “Designed to be raced the sh#t out of”. Is there anything more to say? We think not.