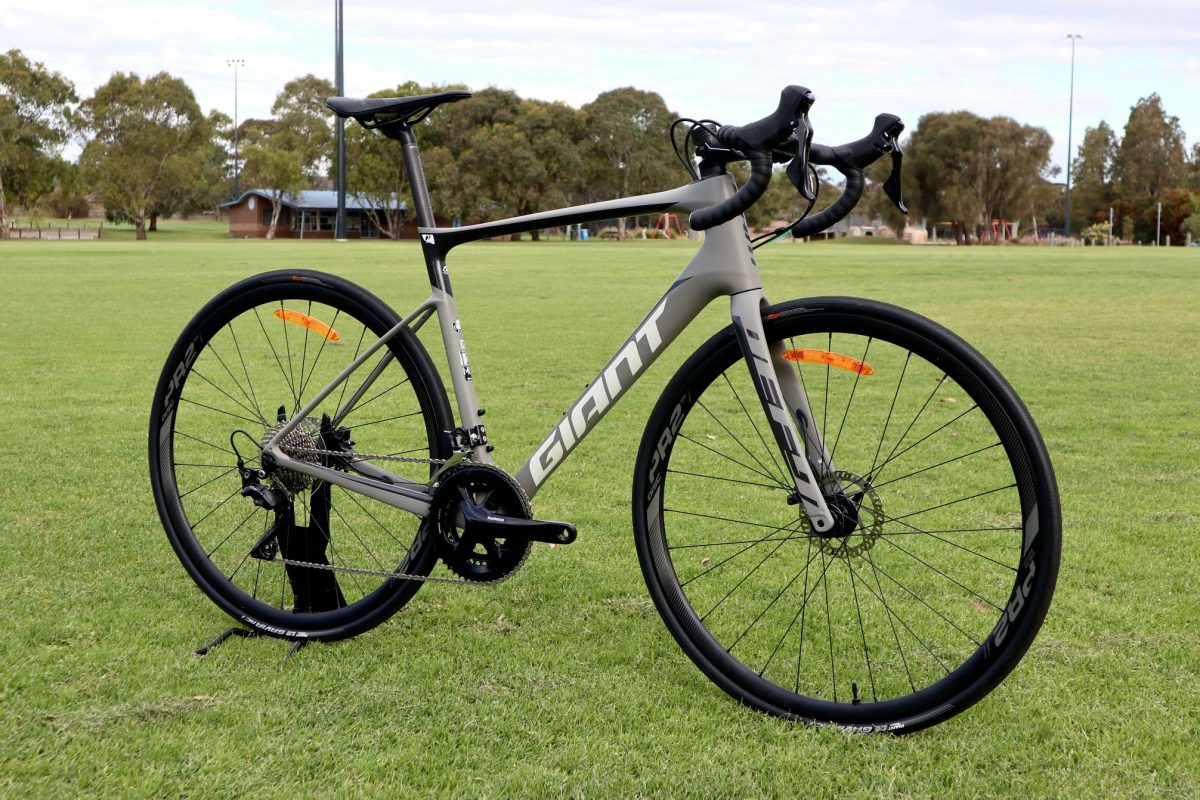 In this article I will outline my experiences riding the all-new 2019 Giant Defy Advanced 2. I will break this review into two primary parts. The bike itself and the riding experience. I will explain the impact the D-Fuse technology has in both the rear and front end of the Defy, and how Giant’s endurance road geometry differs from competing brands. Lastly, I will summarise what style of bike rider I believe the Giant Advanced 2 best suits.

Before we go deep on the Giant’s road endurance machine, I need to be upfront with you.

Once again, I have been challenged in a review…

If you saw my previous review on a titanium Curve Belgie Air you will note that I was challenged there also. Riding my first ever titanium road bike.

While I’ve ridden endurance carbon fibre road bikes before, in fact, I rode the Specialized Roubaix the entire length of New Zealand. The thing is, this time around, I’ve just recenty reviewed two back to back $14,000 road bikes. The Belgie Air and the Specialized Venge.

So I’ve needed to shift my paradigm.

So this is Giant’s upgraded version of the Defy in 2019. Notable changes in the 2019 Defy version versus its predecessor, include:

When I first picked up this bike from a Bike Chaser dealer, Giant Hampton, the first thing that caught my eye – external to the changes listed above – was the head tube.

Having said that, I haven’t ridden an endurance bike for a while, so I thought my head tube perceptions might be a little tarnished from all the race bikes I’ve recently reviewed.

So I went online and compared 56 cm frames from the Defy, to the Trek Domane, and then to the Cannondale Synapse. All competing endurance road bikes.

The head tube on the Giant was at least 10 mm or so more over the Domane and the Cannondale.

Because normally across brands, when you compare geometries, more often than not, you’re talking a few mm here and there. 10 mm is significant.

The headtube length will typically enable the rider to sit up higher or lower, as it will impact the stack.

However, when comparing the three bikes, the stack is almost identical.

So I assumed the bottom bracket must be higher?

It’s actually lower, which provides a surprising level of responsiveness out of the saddle on the Giant Defy.

How can the stack be the same as the competing brands mentioned, when the head tube is so long and the bottom bracket is lower?

I finally figured it out thanks to a discussion with Tim at Giant Hampton.

There has been length taken out of the fork!

Interesting, I ponder. What impact does this have on riding experience? I’ll explain shortly.

While I was researching I also noticed another major difference.

On a 56 cm the wheelbase on the Giant Defy was longer by at least 10 mm over these competing brands.

So this says to me Giant are doing things quite differently with their endurance road bike, the Defy.

I’ll explain this further when I discuss the riding experience.

The bike itself comes with tubeless tyres. That doesn’t mean you can’t carry a tube and use it in case on an emergency, but you’ll get better rolling resistance and can run the tyre pressure a little lower on these without effecting rolling resistance.

The gearing is ever so reliable Shimano 105 (you’ve also got plenty of gearing thanks to an 11-34 cog on the rear) and the braking performance on the disc brakes is really solid.

Although the all-new ‘Conduct Hydraulic Disc Brake System’ which sits on the handlebars has proven to be a little controversial.

It means you have mmechanical levers that are connected to a reservoir. Because this ‘reservoir’ sits on the handlebar, it limits what computer connections and lights you can use, in addition to the flexibility you have of changing out handlebars.

The wheels on the Defy are some of Giant’s own, being PR2 Disc’s.

Lastly, but certainly not least, you’ve got De-Fuse technology in the seat post and the handlebars. Which are essentially engineered tube shapes that are optimised to absorb road shocks and vibrations.

This was an interesting one for me.

I’m going to start with where I started, that being the road.

Immediately, I was aiming for road bumps and divots on Bluff Road, Hampton (Victoria) I would normally stay well and truly clear of on my Specialized Allez. Another $3,000 road bike, but one that is very unforgiving.

This Giant Defy clearly absorbs the shocks and bumps, no question.

I’m definitely sitting up higher; my shoulders are relaxed and there’s no chance I’m going to get neck and shoulder complaints on this bike.

I meet a training group and off we head down to the Mount Eliza hills.

This is where I notice the Defy’s speed.

I’m having to work a little harder up the front, side-by-side with my rotating partners.

The relaxed geometry has me sitting up and hitting more wind than my normal road bike, where I’m normally in an aggressive/lower position. The heavier wheels, while durable, don’t roll with as much speed as my lighter Fulcrum 5 alloy clinchers I have on my personal road bike.

I jump back on the wheel, and I’m still working a little bit harder than normal, but the bike rolls OK in a draft.

We hit the hills on reasonably coarse roads and I feel the comfort of the bike kick in again, rolling up hills at a slower speed, absorbing the road vibrations.

We roll down the hill and the Giant Defy works well on the descent. Its longer wheelbase provides great stability.

Rolling around the roundabout at the bottom of the hill, the Defy feels like it needs more effort to get around.

The geometry – notably the long head tube and wheelbase – makes it compliant on the descent, and no doubt slippery terrain, but it also means the Defy requires a little more effort around corners. Especially when I compare it to my Allez.

We wrap up the group ride, and I go off-road.

Yes, this is where the bike belongs, I subconsciously say. It’s well suited to the off-road terrain.

Having said that, I’m not trying to take anything away for this bikes ability to perform. As professional team Sunweb use this bike for one day classic races. But they are running much lighter and more aerodynamic wheels, with a super light groupset.

With the Giant Advanced 2, if you were after more speed – perhaps you start getting into fast bunch riding or even racing – swapping out the wheels would be a good option.

The Giant PR2 Disc wheels come in at around 2.4 kgs which is quite a heavy proposition. Great for durability but not great for speed.

You would easily knock off ½ a kg by having another set of wheels for the rides where you want to beat your mates around the block. That amount of weight on a set of wheels, is significant!

If you’re looking for something that’s forgiving and comfortable as you roll on the road…you might want to do some commuting on bike paths during the week and then on the weekend take it off road, hitting the dirt trails and seeking the roads less travelled. Bingo! This bike would be right up your alley.

And at a price point of $3,000 AUD you’re getting exceptional value for money too. 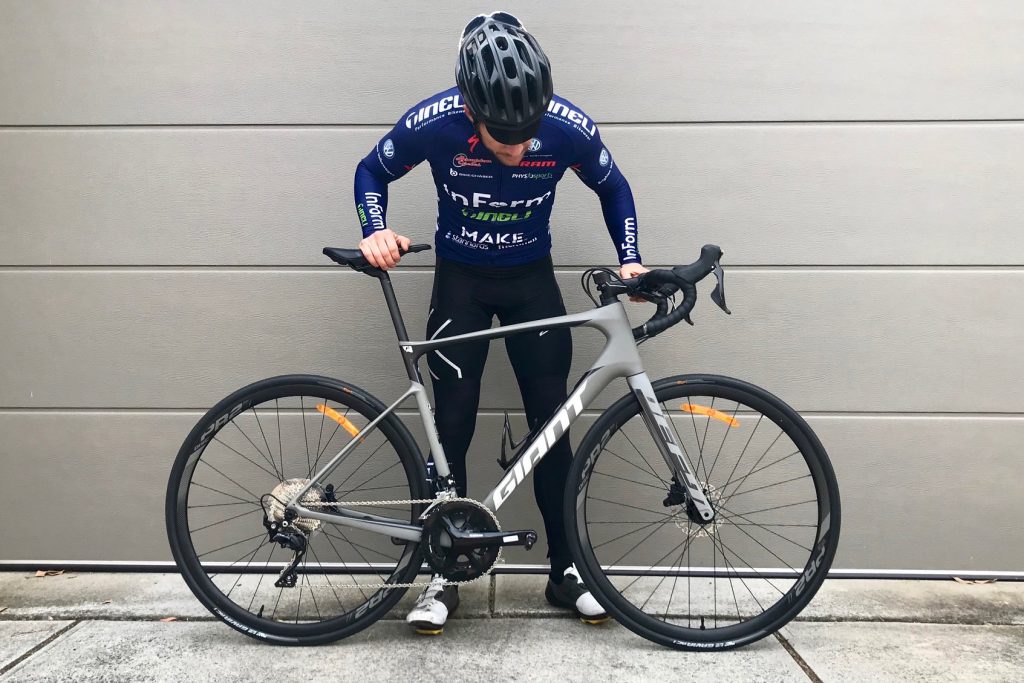