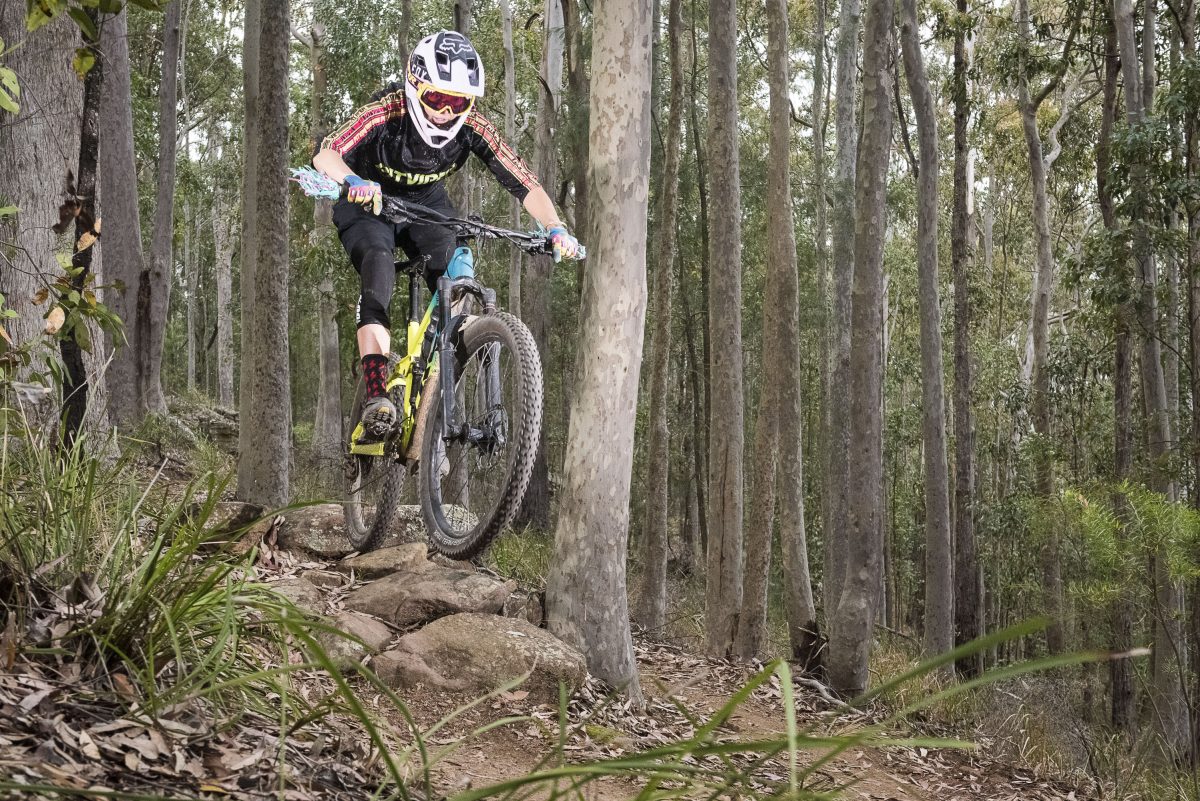 The athletes were spread across two days of racing as part of a tight Covid-19 Safety Plan of racing.

Newcastle’s Graeme Mudd took out the fastest race time in the men’s classification with Zoe Cuthbert from Canberra taking the women’s line honours.

Rocky Trail Entertainment has been based on the Central Coast since 2012, which was when they launched the Fox Superflow gravity racing concept at Ourimbah MTB Park. Since then the unique events have become the most popular and fastest growing gravity racing series in Australia. As one of the major private promoters of the sport in the country, the team from Rocky Trail Entertainment say that their business had faced difficult challenges in the new Covid-19 landscape of the tourism and events industries. However, since returning to the ‘rocky trails’ in July 2020 and despite a community sports shutdown in August and September, their events had been thriving.

“We were the very first private organiser in Australia to return to racing in July 2020 and by next weekend will have delivered 20 events in the Covid19-recovery period across NSW, QLD and the ACT. We temporarily changed critical elements of all our racing formats, which we knew that we could replicate across all venues – including the Ourimbah MTB Park”, said Rocky Trail’s founder and Marketing Director Juliane Wisata.

The business had been able to sustainably adapt to the new Covid-19 environment and had implemented a very strict and tight pandemic risk management plan, explained Wisata and that their customer base had been growing. “We have experienced exceptionally high growth rates across all event types”, she added.

It had been challenging at times, however, as an outdoor events provider they had quickly realised their responsibility to deliver the dearly needed outlet for their customers to return to the trails.

“Riding and racing bikes, like any sport, is an important outlet to stay healthy physically but most importantly mentally, which these times have shown us”, Wisata said. “Whilst racing is our core activity it has become a major goal for us to foster the mountain biking and racing community that we have created over the years – we are grateful that we can be racing on such beautiful trails here on the Central Coast, supported by Council and an active local club”, she added.

Central Coast’s gravity talent was out in force at the Ourimbah State Forest on the weekend with one local racing to take over the overall Fox Superflow Series lead in the Elite Men’s: Jake Newell raced on his home trails against some of Australia’s top enduro names and placed fourth outright in a race time of 7:05.4. The Kincumber rider said he had enjoyed the race so close to home after traveling with Rocky Trail to Fox Superflow events across NSW and the ACT as well as QLD since July this year:

“I was lucky to come away with 3rd place in Elites against some other fast locals. I have competed in the whole NSW Fox Superflow series so far and 1 round in QLD. I love the challenge of technical tracks mixed with some pedaling, which allows these events to cater for every level of rider, it’s always great to see new faces out there giving it a go.” – Jake Newell.

Almost 30 local Central Coast riders had competed in the event with a third of them placing in the top 10 of their race classifications. Young Katarina Carlsson took the victory in the U13’s Female race category home to Umina. The experienced young club rider had been coached by her dad from a young age and completed all three race runs in a time of 9:58.5, which placed her in the top half of the overall female field.

“I am absolutely stoked to take the win today at the Fox Superflow with Rocky Trail Entertainment. I was trying my best to keep it together while my legs were like jelly!” – Katarina Carlsson

Graeme Mudd and Zoe Cuthbert for the outright victories

The Fox Superflow format at Ourimbah MTB Park offered three challenging timed race tracks, with five attempts on each to clock in the fastest combined race time. With un-timed ascents to the starts it’s that social aspect that riders have come to appreciate and love.

Newcastle’s Graeme Mudd is one of Australia’s top gravity racers and had lined-up at Ourimbah for his first competition for the year. The 27-year old elite was the only racer to clock in a sub-seven minute race time and took out the outright line honours in 6:59.8.

“Good thing about winning the only race you have done in 2020, is being able to say you’ve won every race you’ve been in this year! Rocky Trail always puts on a fun event. Was good to spin some legs and some yarns with the bike family.” – Graeme Mudd

In second overall and in the elite men was Thomas Crimmins from Canberra in 7:00.7. In third outright was the Under 19’s winner Cooper Lowe from Engadine.

Fellow South-Sydney racer Connor Mielke took out the fastest female race time on Saturday opening the account with 8:58.5. The time kept her on the bronze podium with Sunday’s line-up of Elite racers of Zoe Cuthbert and Katherine Hosking taking the top steps.

Canberra’s Zoe Cuthbert clocked in a time of 8:13.7 with Armidale’s Hosking slotting in behind with a gap of only 0.3 seconds, who said she had been “itching to get back into racing” and that we was so impressed with the high level of competition among the racing women. The U19’s National Champion Zoe Cuthbert chimed in, admitting that fellow racer Hosking had been pushing her to go faster when she thought she couldn’t. In the overall Elite Women’s series 2020 ranking Cuthbert literally cements her lead with 1950 points ahead of runner-up Hosking with 900 points.

The Fox Superflow events had evolved to its current popularity over the course of a decade, said Rocky Trail co-founder Juliane Wisata.

“We had a strong line-up of experienced racers on the Central Coast across all age groups. This event attracts a lot of juniors and also casual master riders in the 30+ and 40+ age groups with a lot of groups and whole families competing. Over 40% of competitors at Ourimbah MTB Park were under 19 years old with almost one fifth in the 15-17 year age bracket.” – Juliane Wisata