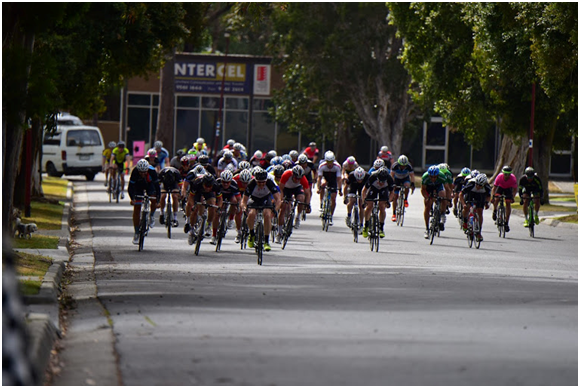 A few weeks back I was finally able to secure my first ever B grade win at the Glenvale Criteriums, hosted by Caulfield Carnegie Cycling Club. After placing somewhere between second and fifth place more than half a dozen times over the last two seasons, this win finally got me the promotion I’d set out to achieve back in 2012.

Considering all the experiences I’ve had in trying to achieve this goal – right from the mistakes I’ve made to the successful ingredients that got me there – I want to share with you all my dos and don’ts of criterium (crit) racing:

DO NOT – be fooled

One of the biggest mistakes I made when I got into B grade was to let myself get intimidated by the change of environment. Whilst I had the ability to climb the ranks from D grade to B grade rather quickly, when I hit B grade I started feeling quite out of place. There were teams and guys who looked like they were serious riders. Moreover, the overall pace was a pretty big jump. While I have no doubt that the top 10% of B grade riders are stronger than the bottom 50% of A grade riders, really, I was getting flustered and disillusioned for no reason.

It actually wasn’t until this year’s crit season that I went into races with confidence. Firstly, I’d been riding B grade on and off for three years, so I was starting to know the riders and also how to read the bunch. But perhaps most importantly, the training company I have been working with since May of this year put a few things into perspective, allowing me to see the bigger picture. As a result, my confidence grew significantly, which impacted on my mindset going in to each race. In previous years I had inadvertently let the bunch take control on the bell lap leaving me nowhere to be seen at the finish line. This year, my confidence has allowed me to take control of the final and most important stages of the race, putting me in a position to get the results that I wanted.

Looking back, I wish I started B grade with a different mindset. Forget what the other riders look like and what teams there are. Just focus on your own ability and remember: just because someone looks fast, it doesn’t necessarily mean they are!

DO NOT –  be sucked into poor training and coaching

At the start of 2012 I decided I wanted to have a decent crack at getting into A grade. At the time I had achieved a couple of minor placings in B grade but nothing decent, so I decided to get some help from a professional training organisation. While doing group rides with mates was a lot fun and it kept me fit, my form fluctuated and it clearly wasn’t making me stronger.

I bit the bullet and invested $500 in a twelve-week training program. Over the twelve-week period I was able to improve slightly and I got a couple of good results here and there, but ultimately I did not achieve what I had set out to do. Here are a couple of reasons why:

1. I went into it alone – I certainly feel that when you’re training for an event or looking achieve a specific goal, particularly when cycling isn’t your profession, having other people to train with makes a world of difference. Unfortunately, I didn’t have that team around me. The training organisation I used sent me a twelve-week program in four-week blocks, so when I went to follow the instructions, I quite often got distracted by a mate saying, “come on, let’s just go do the group ride”, or some personal distraction would pop up. I was very unengaged with the program and I had no support crew to help me through it.

2. Unengaged coach and poor program – Unfortunately, the specific program I signed up to did not offer any group training rides and the program seemed to be very generic, which was all sent and delivered over the internet. On top of this, the instructor I was dealing with was perhaps the most un-engaging sporting coach I have ever come across. There was no useful advice or words of motivation over our weekly phone calls or emails. In fact, on the odd occasion I would tell him that I had just completed a race, and there would be complete radio silence at the other end of the phone – Hello McFly! Anybody home? Overall, it did nothing to get me fired up and training the way I could have been.

DO NOT – race without a plan

I used to make every mistake in the book when it came to crit racing, including:

– Doing loads of work at the front of the peloton at the start of a race and burn energy for no reason.

– Helping the peloton catch a break, when I wasn’t even in a team!

– Doing turns at the front on the last laps – burning all my energy before the sprint.

– Riding off in breaks with two to three riders, which is highly likely to be caught.

(Yes, you can stop laughing now…)

You name it, I did it, for reasons I can’t explain. I wish I could get in a DeLorean, go back in time, and shake myself, saying – “what the hell are you thinking”.

What I should have done from the outset was work out my strengths and weaknesses as a rider. Once established, I could then use those parameters to identify the best strategy and stick to a specific plan at every race, no matter what. Sure, a race isn’t always going to end up in your favour, but there will be times when it will. And the more times you can get yourself in a favourable position, the more times you’re going to end up with an opportunity. Riding sporadically with no plan will leave you nowhere, as it did with me for a number of years.

DO – get some good professional coaching

I can’t stress enough the benefits I have received from professional coaching. Recently, I have been successfully trained by the coaches from The Hurt Box, who are engaged with their pupils, offer very good advice, and use proven training methodologies that clearly work. Sure, there are costs involved, but in my opinion the benefits far outweigh any expense. Below I have listed some of the key features of professional coaching that I believe have helped me progress into A grade:

1. Structured training has conditioned my body to prosper under race conditions.

2. Weekly group rides ensure you get out of bed and on with the job.

3. Education about racing tactics and how to conserve energy, i.e. where to sit in the bunch and when to look for an attack etc.

4. The ability to focus on my own capability and what type of race plan may best suit my overall strengths.

5. General motivation to keep me on the path to success.

I found likeminded people by joining a team (InForm Racing), but you may not have to join a team to find other likeminded cyclists. Connecting with other riders who share similar goals and a passion for cycling will help you immensely with motivation and being able to stick to a relevant training plan. Before I joined InForm Racing, I knew that bunch rides and inconsistency in my training would have an effect on my performance, but without anyone to join me on specific training rides, it became very hard to drag myself out of bed and do hill repeats. It’s also hard to fit in 250-350 kilometers a week without any support, particularly if you already have a busy lifestyle.

Joining forces with friends, a team, a coaching group or even members of your local cycling club will help you to be more consistent and specific with you training.

DO – understand your ability and have a race plan.

I’ve read articles in the past that discuss having a race plan, but rarely do they emphasise the fact that you should understand your own ability before developing a plan. In my opinion, the best way to understand your own ability is to use and train with a power meter (see a previous article here), which will help you ascertain your strength over specific time periods. For instance, you can learn how powerful you are over short and long time periods measured in seconds, minutes or hours. Once you know where your strengths lie, you can develop a plan that works best for you (and then stick to it!).

Using myself as an example, I found out that I have no kick or sprint, but my five to twenty minute power output is quite good. Therefore, the best scenario for me is to either attack off the front with about five to ten minutes to go, get in a breakaway, or if I end up in a bunch sprint, try and hit everyone early and just hope that I hang on for dear life. In fact, the latter was how I won my B grade race. I went off the front with about ten minutes to go, but could only last roughly four laps before a break reeled me back in. A couple of minutes later, with about three laps to go, the bunch caught the break. Luckily, I had just enough time to recover before I hit everyone at the last corner of the last lap. I was obviously sitting near the front of the peloton at the time, so just coming out of the last corner – rather than try and grab a wheel – I put as much effort through the crank as I could, generating a gap big enough for me to hang on to.

Without understanding my ability, I probably would have tried to grab and wheel, and subsequently lost out in the sprint.

There you have it; the dos and don’ts of crit racing. Here are some other points I’d like you to consider if you’re looking to make that next step:

2. Learn who the good riders are in your grade. Watch them during the race, stick close to them and study their movements.

3. Outside of your race plan, practice conserving as much energy as possible. In particular, learn to hold the wheel coming out of corners. You can lose a lot of energy chasing down wheels.

4. Be safe and courteous to other riders. We’re all in it for a good time, so let’s not forget that.

5. Be supportive to the club you ride for and with. There’s a lot of effort and volunteering that goes on behind the scenes to allow us all to ride, so make sure you’re thankful every time you collect your race number.

Do you have anything to add? Please leave your questions and comments in the comment section below.