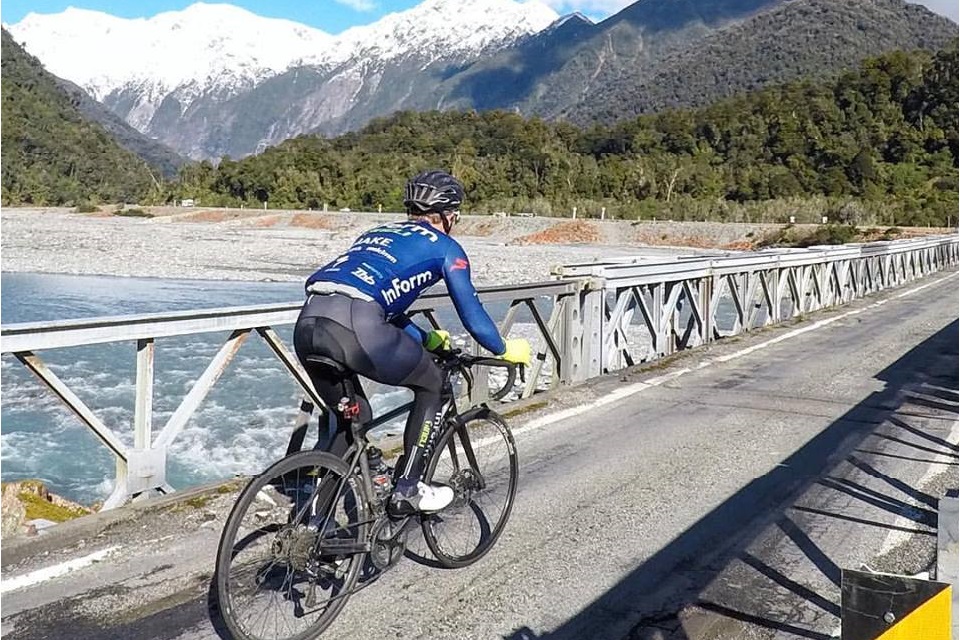 After yesterday’s rain-filled day of pain, Cam got some much-deserved sunshine to lift the spirits. Day 10 of Ride the Long White Cloud would have been a soul-destroying experience for even the most hardcore ultra-endurance athletes, so we’re happy he got to see the best of New Zealand winter on his 214 km from Ross to Paringa. In the words of his wife and one-person support crew, this ride is taking its toll on the man after 11 days in the saddle. Enter Alice:

“It’s been nearly two weeks since Cam got on his bike at Cape Reinga on the tip of the North Island in New Zealand and began to head south. We’ve had sunshine, yes, and then hail, sleet, rain, ice and now snow. I dropped him off to start his ride in -4C temperatures today and he’s got a big climb ahead of him.

I’ve unpacked-in and packed-up-from 12 separate hotel rooms, played the role of nutritionist, cook, masseuse, support vehicle, calm in the storm, and ‘rememberer of all of the things.’

After two weeks of riding, Cam is struggling to hold a conversation with another human, and the few times we have physically stood together during the last two weeks (maybe 4 times), I’ve had to do the speaking for him.

He doesn’t hear me, he’s in the zone, or he’s so exhausted that there is a bubble around him.”

Today was a great day. Blue skies, snow capped mountains, rivers, lakes, epic valley winds and no mechanical requirements. I rode from Ross to just after Paringa, 213.7 km. I was hoping to make it to Haast but the sun was disappearing, it was getting very cold and there was no mobile reception for almost 100 km on Highway 6, between Fox Glacier and Haast.

Alice picked me up about 40 km from Haast, around 5 pm. She didn’t want me riding late into the evening in alp territory with no mobile reception, and neither did I really.

While the day was amazing the cold and thin air increased my fatigue. I am very tired right now. Alice will drop me back to the same location in the morning at 6:30/7 am, where I’ll start again, aiming for Wanaka. Closing in on Bluff…

While you’re here: Cameron’s riding the length of New Zealand over two weeks to raise funds for youth cancer charity CanTeen New Zealand and CanTeen Australia. Please head over to the campaign page to see our fundraising tally and make a donation:

Follow Cam through New Zealand – check out our other ride updates below: