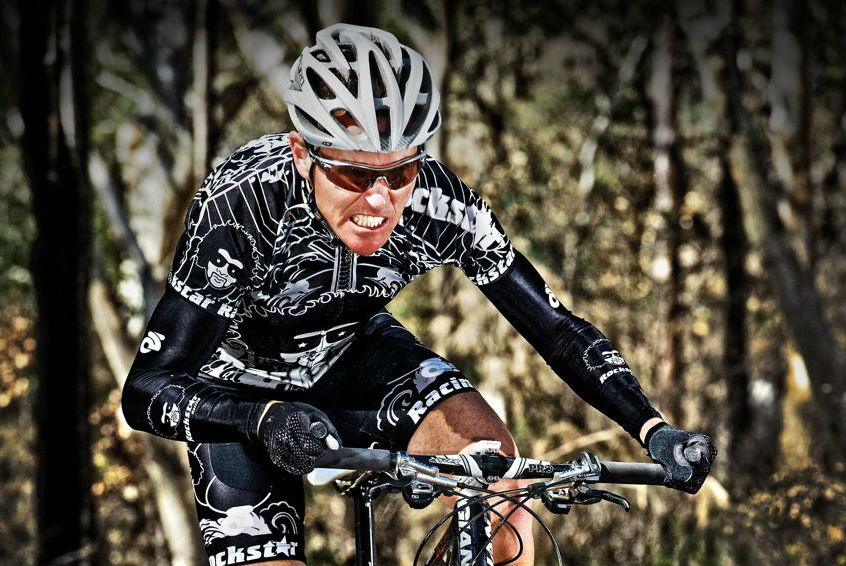 “Go hard or go home”. Those five words sum up what BH-sponsored rider Craig Gordon is all about. Few people on this planet are able to dig as deep as Craig when it comes to physical performance. “Gordo” would rather die than give up – and he almost did.

2006 was the year that Craig shot to fame in the world of extreme mountain bike racing. After training hard for more than a year, he travelled to the United States to challenge six-time winner Chris Eatough for the title of the 24 Hours of Adrenalin World Solo Championships. This race would be best described as the Le Mans of cycling. Over a period of 24 hours, participants have to complete as many laps as possible and whoever goes the furthest is crowned the World Champion of 24-hour solo racing.

The odds were in favour of Chris Eatough taking his seventh consecutive title. Backed by his support crew and his careful preparation Eatough was in a league of his own. Craig on the other hand, had qualified for the race by winning the Mont 24 Hour in Australia. Craig would normally compete in 24-hour races in a two-man team but his partner had tonsillitis so he ended up competing as a solo rider. Part of the winning prize was $3,000 towards representing Australia in the World Championships.

The race quickly became a duel between Craig and Eatough. After the first lap of the eight-mile course, they had left everyone in their dust. The two riders stayed close to each other throughout the day but Craig new that he would have a good chance of breaking away during the night. Whereas Eatough was traditionally a strong starter and a slow finisher, Craig liked to go extra hard at the end. As the night creped in Craig felt strong and decided to attack. Between the hours of 1 AM and 5 AM he created a gap of 49 minutes and ended up beating Eatough by one full lap. However, during the early morning hours Craig’s body started to act up. Any bumps on the path would send an immense pain through his calf and Craig was having a hard time managing the pain. On his final lap, Craig got off the bike and started walking. His body temperature dropped and he had to sit down for a while to deal with his damaged calf. Finally, he got back on the bike and rode to the finish line, using only one leg.

Craig had won the race but there was no time to celebrate. Instead he was rushed to hospital where he underwent 48 hours of dialysis. He was diagnosed with rhabdomyolysis, a condition that is caused when muscles are damaged to a point where the muscle cells are released into the blood stream, thus leading to kidney damage and potential kidney failure.

After the race, Chris Eatough concluded that this had been his best 24-hour race to date, however it was hard to compete with Craig’s willingness to push himself to the extreme.

How it all came about

Craig grew up in the Blue Mountains in NSW, and like most kids, he loved riding his bike. BMX was his bike of choice in the early years, and his determination to ride fast was evident from a young age. In his early years Craig even saved up to buy a top of the range Diamondback for $800. However, like most kids, cycling didn’t survive his teenage years, with distractions such as girlfriends, parties and hanging out with mates getting in the way. It wasn’t until Craig completed his apprenticeship as a fitter that he truly found cycling.

Craig was working night shifts at Carlton United Brewery in the early nineties. It was 4 AM one morning and Craig was waiting for the train at Sydney’s Central Station after the completion of a night’s work. At that time of the morning you pick your carriages carefully. Craig spotted a normal looking guy sitting in a carriage with his mountain bike perched next to him. Craig jumped on board and started a conversation with his new mate Paul King. Little did he know that an innocent “hello” would not only be an introduction to a new friend, but also a lead-in to a career in cycling and a lifetime of passion for the sport.

From placing in B grade to winning A

Paul convinced Craig into buying a mountain bike and then, of course, the normal chain of events followed: the riding started occurring after work, then before and after work and then before, after and during working hours. The addiction was almost immediate and the bike went everywhere with Craig. Soon after, Paul introduced Craig to racing and Yarramundi Mountain Bike Club in Western Sydney.

It certainly wasn’t immediate success for Craig in a race environment. While he enjoyed the competition, he “was getting his butt kicked”, finishing around fourth or fifth place in B grade, until he could no longer find time to race. Craig changed jobs not long after the racing bug had kicked in, and unfortunately, longer hours prevented him from racing for the first six months of his new working life. Craig was working night shifts six days a week so instead of racing he started riding to and from work. The trip from the Blue Mountains to Sydney was over two hours each way so Craig was riding four to five hours a day, six days a week. Craig lost 15 kilograms over the space of six months and subsequently became a very strong and physically astute cyclist. Craig’s wife Anita used to see Craig riding back along the Great Western Highway at 7 AM, while she was on the train heading into Sydney’s CBD for work. Luckily for Craig it wasn’t long before the demands of working six nights a week diminished and he was able to return to racing. The long rides to and from work had improved his fitness so much that he went straight into A grade and won at his very first attempt.

Results on the bike

Although Craig has beaten some of the best within his discipline, his proudest achievements are those where he has been staring into the face of adversity. He finds it motivating to compete against riders who are supported by larger and richer teams or riders who are later found out as drug cheats. Many would see this as an excuse as to why they didn’t win, but to Craig this is an opportunity to thrive and overcome challenging situations. One of Craig’s proudest moments, and a prime example of his will to achieve and thrive in the face of adversity, was at a 2001 Swiss World Cup event. Although he was coming back from injury and had a lot less support than most other competitors, Craig managed to finish third behind Miguel Martinez and Thomas Frischknecht. Many of the other competitors were in excellent shape following the 2000 Sydney Olympics, yet through exceptionally tough, muddy conditions he drove it hard to finish in third position.

When a man is late to his own wedding because he decided to spend four hours on his mountain bike before the ceremony, there are clearly pedals and cranks in his DNA.

In 2011 Craig was the victim of a hit and run incident which left him with serious injuries. The car knocked Craig off his bike and sent him flying into the back of a parked truck. He suffered a broken back, broken neck and shattered his shoulder blade into twelve pieces. In a situation like this, most people would question whether they should get back on the bike again. That was not the case with Craig: “I just love getting out there and riding fast! Nothing will stop me from pursuing the sport I love.”

Craig has a very simple training philosophy: “If you really push yourself in training and make training harder than racing, racing will become easier. I know that if I train harder than I need to race, results will follow.”

One of Craig’s training methods has been motor pacing. With his coach Dave Sanders, Craig would pace behind a motor vehicle for four to five hours straight and well above race tempo. “I love pushing myself. When you’re on the mountain bike it’s that fine line of in and out of control. It’s an exhilarating feeling. You can feel your front wheel drifting and there’s so much spontaneous movement – it’s like a natural drug. I’m clearing my head while I’m doing something I love.” Craig is truly an inspiring bloke. As fellow cyclists we can all learn from Craig’s ability to place demands on his body in a way that most people haven’t even come close to. It’s a demonstration to all of us that if you train hard and push yourself, you might achieve something you didn’t think was possible.

Craig’s colleagues at BH Australia highlight his humble nature and team spirit as some of his strongest traits. Despite his many national and international achievements Craig still enjoys attending local races and riding just for the fun of it. Of course, part of that fun comes from pushing himself as hard as he can.

2. Best ever training tip? The more you sweat in practice the less you bleed in battle.

3. Dos and don’ts of cycling? Do want you love. You have to look fast to be fast. Train harder than you race. Don’t ever make excuses.

4. Best cycling trip? My honeymoon. We travelled around the US and Canada and I took the bike everywhere and rode three hours every day. Plus, I got to do it all with the love of my life by my side.