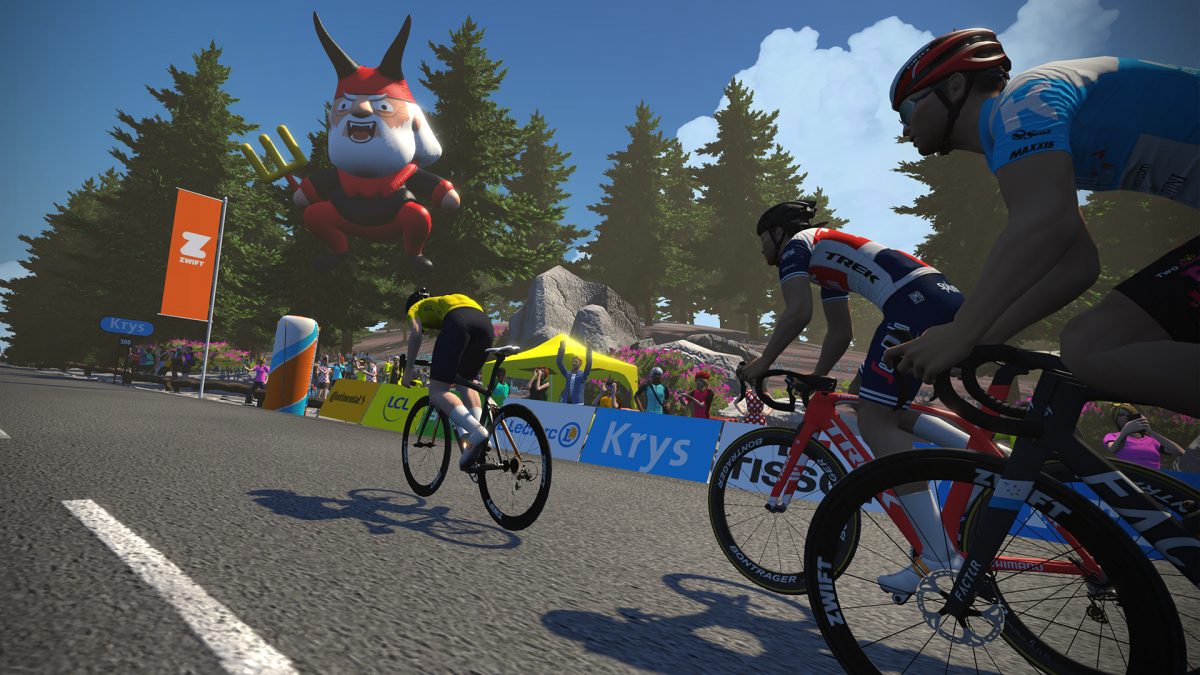 The weekend of the 4th and 5th of July seen the running of the first ever virtual Zwift Tour de France. With Covid impacting the real life tour Zwift and the ASO have combined to bring us the next best thing.

The Tour de France in real life is now scheduled to kick off at the end of August. Stay tuned for updates on this one.

During the first three weekends of July 2020, men’s and women’s professional races will be organised as part of virtual stages of the Tour de France. Continuing on from the major increase in cycling at home in recent months, cycling lovers from all over the world will also have a chance to ride the Virtual l’Étape du Tour de France on the same weekends.

So what is the Virtual Tour de France?

How long is the Virtual Tour de France?

The Virtual Tour de France is six stages. There are two stages every weekend, starting on Saturday, July 4, and ending on Sunday, July 19.
Stage lengths vary, but each is roughly one hour long. So get ready for action from start to finish.

The 6 stages of the Virtual Tour de France:

The Virtual Tour de France wouldn’t be the same without the famous Yellow, Green, Polka-dot and White jerseys held by the leaders of the race. Standings for all jerseys will be calculated using a points-based system.

The first Virtual Zwift Tour de France kicked off around the hilly loop of Watopia and saw 16 women’s teams and 23 men’s teams race full gas from start to finish. Taking in 4 circuits of the hilly course with 4 intermediate sprints and 4 Q/KOMS up for grabs.

The women’s peloton was whittled down to a small group that made it to the line with April Tacey (Drops Cycling) sprinting over first with Kristen Faulkner (Tibco-Silicon Valley Bank) taking second and Chantal Van Den Broek-Blaak (Boels-Dolmans Cycling Team) rounding out the podium.
The men’s race saw the peloton split early on and the lead group riding to the line in a fast sprint finish. Ryan Gibbons (NTT Pro Cycling Team) powered up and went hard taking the stage win with Pier-Andre Cote (Rally Cycling) taking second and Nick Schultz (Mitchelton-Scott) taking third.
Prev 1 of 1 Next
Prev 1 of 1 Next
Stage 1 Virtual Zwift Tour de France Highlights

“I can’t believe me winning means the team are going to be wearing the yellow jersey tomorrow. My plan was that if I got an aero boost with a few laps to go to keep it and use it for the final. I had it with two laps to go and my brother clicked the aero boost with 300 meters to go and then I just gave it my all.”

“I’m feeling truly, truly overwhelmed. It’s such a great initiative and it’s good to have something like this. I’ve been really missing the racing so it’s been great to be able to be a part of it, and then to win the first stage is something special.”

“It was a very tough route, cresting that final climb 2 kilometers from the finish I think everyone was pretty toasted at the top and then trying to save a bit of energy on the downhill. Fortunately I had a power up and it was a fast run in so I knew I had to go early. Once I went I knew I just had to really keep going, it was a fast sprint but I’m happy that I managed to pull it off.”

“There’s no respite, obviously it’s no comparison to the length of a full Grand Tour stage but in a Grand Tour it’s not flat out racing from start to finish, there’s a lot of times where you can recover, you can have a chat with your friends, whereas on here from the moment you clip in to the finish line it’s absolutely full gas. It comes down to pure power, it’s pretty ruthless.”

On the second stage of the Virtual Zwift Tour de France riders faced their first mountain climb of the race. The Radio Tower climb posed 9.4km of ascent with an average gradient of 3.9% that lulled both women’s and men’s peloton into racing it at full-gas but then saw both races splinter into small groups as the last kilometre ramped up 13.7%. Those who managed to hang on to the front groups as the pelotons split had to use the descent to recover and hoped they could make it to the line without being caught by the chasing groups behind.

The women’s peloton saw a strong group of riders go on the climb with Cecilie Uttrup-Ludwig (FDJ Nouvelle-Aquitaine Futuroscope) and Erica Magnaldi (Ceratizit – WNT Pro Cycling Team) attacking just before the top with Magnaldi taking the QOM points. As the peloton neared the finish line, a lone group of three at the front were joined by the chase group of four riders behind, making it a seven woman sprint to the finish line with Lauren Stephens (Team Tibco-Silicon Valley bank) timing her aero power up to perfection and taking the win.

The men’s race saw equal attempts of attacks on the climb leaving the peloton splintered over the top. With 10km to go a lead group of four were trying to keep their chasers at bay but were caught with 6km to go. A photo finish sprint saw Julien Bernard (Trek-Segafredo) narrowly taking the win over Freddy Ovett (Israel Start-Up Nation).

The most combative riders of the day were Cecilie Uttrup-Ludwig (FDJ Nouvelle-Aquitaine Futuroscope) and Geraint Thomas (Team Ineos).

“It was definitely brutal, it was my second time racing up Radio Tower and it is never easy. At the end being in a group of four you know not to think that it’s race over, especially on Zwift, things come back together pretty quickly and we knew that we would be quicker on the downhill than the lead group, and that’s where we really closed that time gap.”

“Once I hit Radio Tower for me it was just about sticking with that group as much as I could. There’s no pacing on Radio Tower it’s just a flat out effort and prior to that it had felt relatively calm, I think everyone was waiting for that moment.”

“Over Radio Tower my teammate Kristen (Faulkner) was actually in between my group and the lead group and we told her to chase onto the front group and once she made it on we knew that we could wait in the group behind. Then luckily some girls in my group decided to push and our group made it across to the lead group. Then I made sure I timed that aero power up at just the right time for the win.”

“It was a really fast start and when we arrived to the mountain I was really on the limit, I think I passed in the second group at the top and then I was with the group of four on the downhill and that’s when I knew that I had to try and recover and save something for the sprint because I know that it’s really hard on Zwift to attack and go alone, so I knew that I just had to save the energy and in the end it was a success.”