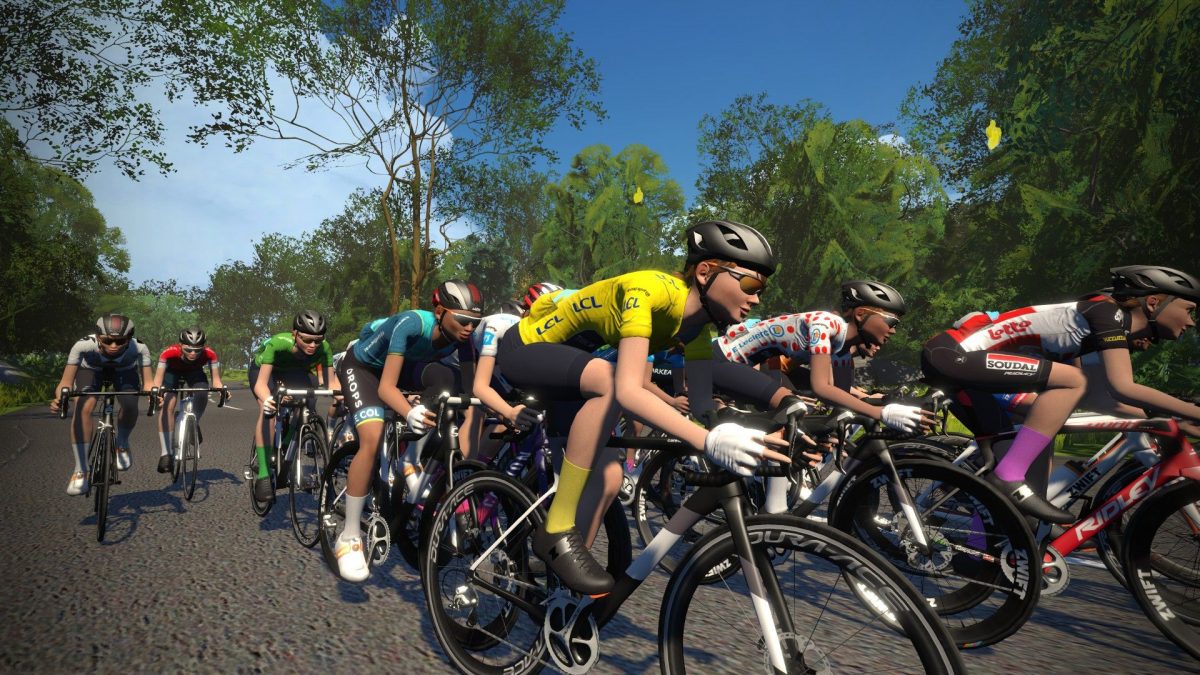 The men’s and women’s professional races continued to provide fast and exciting racing over the second weekend of the first ever virtual Zwift Tour de France.

During the first three weekends of July 2020, men’s and women’s professional races will be organised as part of virtual stages of the Tour de France. Continuing on from the major increase in cycling at home in recent months, cycling lovers from all over the world will also have a chance to ride the Virtual l’Étape du Tour de France on the same weekends.

The 2nd weekend started with high octane sprint finishes for both the women’s and men’s pelotons, seeing experienced Zwifter Tanya Erath (Canyon//SRAM Racing) take the win on the women’s race and Matteo Dal-Cin (Rally Cycling) just edging through and taking it for the men’s. The 48km course consisted of a two lap circuit through Zwift’s virtual France R.G.V. route, and gave teams the opportunity to pick up intermediate sprint and Q/KOM points along the way. High average speeds on both races saw riders lose contact with the main groups early on. 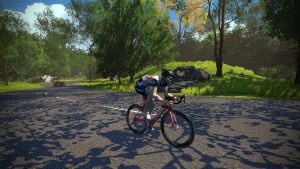 This week teams went in with the intention to defend their jerseys, Drops Cycling proved they wanted to keep the polkadots and rode aggressively into the QOM with April Tacey (Drops Cycling) again showing her strength and picking up the first set of QOM points. With 5km to the finish line the pace began to increase and as the finishing 2km saw the peloton string out as it snaked around multiple bends, there were only 25 riders left in the bunch to contest the sprint. Erath’s win hasn’t quite managed to unseat Tibco-Silicon Valley Bank from the GC and will see the American team start tomorrow still holding the yellow jersey, but they’ll be happy to be going into stage 4 with the green jersey and retain the young rider’s jersey. 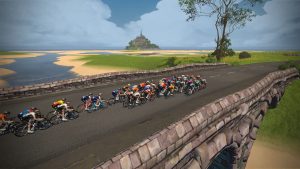 A high speed first lap in the men’s race saw some big names, such as Egan Bernal (Team Ineos), Yves Lampaert (Deceuninck – Quick-Step) and sprinters Elia Viviani (Cofidis) and Nacer Bouhani (Team Arkea-Samsic) dropped by the end of it. After the final KOM whittled the peloton down further a group of 34 came in towards the final straight with speeds reaching 64kph. Another photo-finish confirmed that Matteo Dal-Cin just managed to take the win ahead of Jake Stewart (Groupama-FDJ). After some aggressive riding from NTT Pro Cycling Team they keep the yellow jersey and extend their lead, whilst also keeping the green sprint jersey. Israel Start-Up Nation still top the ranks on the KOM points keeping the polkadots for another day.

The most combative riders of the day were Tanya Erath (Canyon//SRAM Racing) and Edvald Boasson-Hagen (NTT Pro Cycling Team). 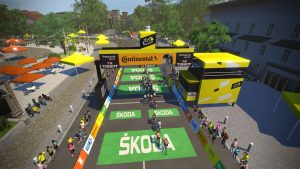 “Some girls opened up really early so I just tried to keep the pressure on and stay on their wheel then I shift down and get my head down and really go for it with 200m to go. Normally a sprint on Zwift is longer than on the road because you need some time to be able to really increase the speed and then you have to use your power-up and time that right.”

“We got some tips from the Saris indoor racing team and they said that through the final twisty section the draft would come and go so we were prepared for that. Then I waited until 200m to go to use the power-up as they said that it would be roughly how long it would last for and then I just sprinted with everything I had until the end and looked up and saw the finish screen and it said that I was first so it was super cool.” 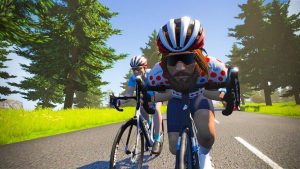 Tacey and Ovett are victorious on the French leg-breaker

Today’s stage named ‘casse-pattes’ which translates to ‘leg-breaker’ truly lived up to its name. The 4th of the men’s and women’s professional races. A video collage of grimaces could be seen across rider’s faces live from many of their homes around the world. Tibco-Silicon Valley Bank and NTT Pro Cycling Team went in racing aggressively to protect their GC lead, which by the end of the 45.8km race their tactics paid off and we’ll see them line up for the final weekend with the yellow jersey. Both races saw reduced bunch sprints with April Tacey (Drops Cycling) taking her second win of the Virtual Tour de France and Freddy Ovett (Israel Start-Up Nation) finally managing to pull off a win for his team after closely missing out last weekend. 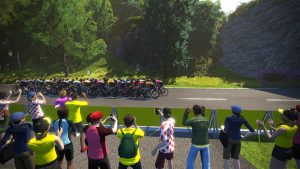 The women’s race saw many of the big names out the back of the bunch on the first lap as the pace was high into the first set of QOMs. The second lap saw riders such as Chloé Dygert and Chantal Blaak yo-yo in and out of the front group down to some strong attacks at the front. In the last 4km Sarah Gigante (Tibco-Silicon Valley Bank) attacked with her teammate, Lauren Stephens, seemingly to chase her down. Confusing tactics at first soon became clear when their increased speed managed to whittle the bunch down to only 5 riders but with under 2km to go the bunch came back together with 11 riders going into the sprint. Leah Dixon (Tibco-Silicon Valley Bank) went early in the mad dash to the line to have April Tacey pull ahead of her in the last few meters to take the win. Whilst Tibco-Silicon Valley Bank stay ahead in the GC, Drops Cycling’s aggressive defence of the polkadot jersey saw them keep it going into the final weekend but also collecting the white jersey through Tacey’s impressive performance. Canyon//SRAM Racing will continue their defence of the green jersey into next weekend.

The men’s race was another hour of full-gas racing with NTT Pro Cycling Team active in keeping the pace high leading the peloton to split over the KOMs on the first lap. Ryan Mullen (Trek-Segafredo) made an impressive attack, although in vain, with 20km to go bagging him most combative rider of the day. Whereas Daniel Turek was highly commended by his teammate and stage winner, Freddy Ovett, for helping him deliver on their team tactics. On the final descent a group of 7 managed to pull out a lead of 10 seconds, with Will Clarke (Trek-Segafredo) going hard into the final right hand corner towards the line but was unable to hold off Ovett (Israel – Start-Up Nation) coming over the top in the last few meters to take the win. Going into the final weekend Israel – Start-Up Nation hold the polkadot jersey whereas NTT Pro Cycling Team are the team to chase down next week holding the yellow, green and white jerseys.

The most combative riders of the day were April Tacey (Drops Cycling) and Ryan Mullen (Trek-Segafredo).

“It feels amazing to win another stage, that race was really, really hard, coming into that last hill I nearly lost it, there was a 4 second gap and there were about 5 of us off that front group and we just worked together as a group, I used my aero power-up and we luckily managed to get back on with about 1.5km to go. I can’t believe I then managed to win the sprint.

“I live in Girona, Spain and we were in lockdown for two months so before that I didn’t do Zwift at all, then after two weeks I hopped on and started riding with my mates and absolutely loved it to be honest. I just found it such a great tool to get some quality training done and I just raced week-in-week-out. It is a game, you have to learn the ins and outs of it but to be honest I don’t think it’s as complicated as people make it, you start hard, continue hard, finish hard, that’s it. It’s a fantastic training aid and I’m a massive fan of it. I think it’s fantastic.” 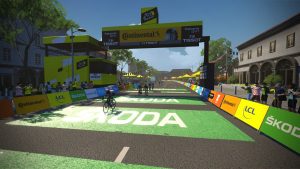