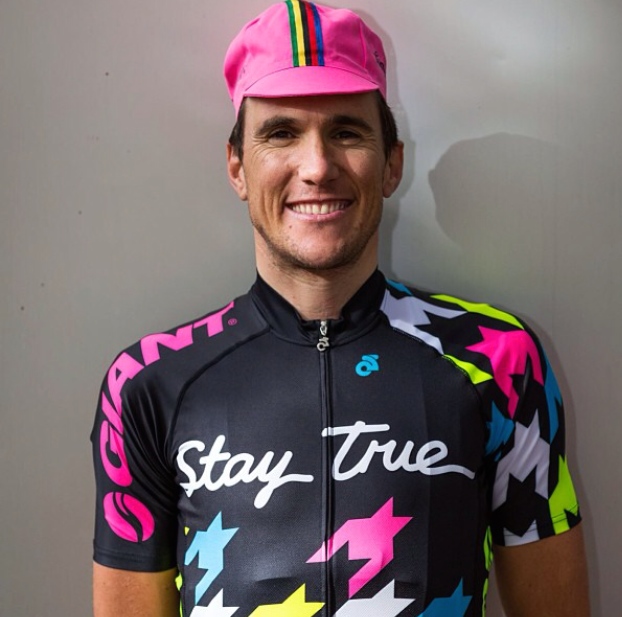 If you’re in the Melbourne cycling scene there’s a fair chance you’ve come across Lee Turner. Whether it’s the bling that catches your eye, or his distinctive voice delivering a well-timed anecdote, this colorful character known as “Hollywood” is one in a million. But outside of his big personality and boisterous nature, he’s certainly given a lot back to the sport that he originally took up to “just keep fit”. Let’s take a look at the story behind Lee Turner and why he’s our Cyclist of the Month… How the love affair began

Lee played amateur footy (Aussie rules) for a number of years for Edithvale Aspendale footy club. He played predominately as a key position backline defender and was (not surprisingly) renowned for wearing colourful boots, a headband and a long-sleeved jumper.

When his football career was coming to an end Lee made note of what was happening to most retired amateur footy players: drinking beer at the TAB and slowly but surely becoming unhealthy and overweight. So to mitigate the risk of falling into this trap, Lee took up cycling during the summer months a couple of years prior to hanging up the boots. Little did he know that this side sport he had implemented to keep fit, would become a highly addictive passion – leading to new friends, a new life and even love!

One thing leads to another When Lee started going on Melbourne’s notorious ‘Hell Ride’ the morning before a footy game, he soon realised where his priorities lay. Whether it was the fact he was “rooted by half-time” or he’d been bitten by the cycling bug, Lee soon saw himself detaching completely from football and entering a new world. Living in Chelsea at the time, Lee spent a fair amount of spare moments hanging out at Mainline Cycles, buying colourful, high-end bike equipment (which is how the name ‘Hollywood’ was spawned), and of course, chewing the fat with shop owners Brooke and Warren Nelson.

On one occasion, after Lee had been deliberating on racing and joining a club, he asked Brooke and Warren. “What cycling club should I join, Chelsea?”

Brooke responded, “Chelsea’s a bit small if you’re looking to really get involved in racing and club activities, so we’d recommend Caulfield Carnegie. Although there is this new club called St Kilda Cycling Club, but they’re just a bunch of show ponies, prancing around drinking chardonnay and lattes at all the in Bayside cafes”.

When Lee first turned up at SKCC to cut his teeth on some racing and a new scene in competitive sports, he didn’t quite know what to expect. To him, long gone were the days of team camaraderie and sporting mateship; entering a new world of individual sport, racing on your own, against the rest. He would soon find out, however, that this was far from the truth. Malachi Moxon, another renowned Melbourne SKCC member, had caught Lee’s eye early on in the piece down at the club.

It may have been the finely tuned machine he was riding or the fact Malachi appeared more like the Aussie rules specimen Lee was so used to engaging with. Irrespective, Lee had found a new friend and a new hang out – Spoken Bike Store in St Kilda. It was through this connection that the ‘Stay True’ Cycling Team was initiated, but we’ll get to that shortly. Since joining SKCC in its 2nd year, Lee’s been an influential participant in the Club’s activities.

For a couple of years he worked on the committee as their Communications Manager, writing race reports for all the different cycling grades, as well as giving up his time to marshal most weekends.  In recent years, outside of being a high profile advocate, he’s worked on some special projects, as well as being a Master of Ceremonies for a number of their social events.  And to top everything off, Lee adds an enticing layer to the club, with a big welcoming attitude and outgoing personality.

The Stay True Cycling Team has evolved considerably over the past 10 years. Originally it was just a bunch of close friends who knew each other through SKCC, riding in the same kit, with a café called Nacional sponsoring the team. From there, they got a little more serious as the ‘Sole Devotion’ Cycling Team, with the incorporation of official bike and equipment sponsors. About 18 months ago, Giant Bikes, a pivotal player in grass roots cycling, approached the team. They wanted to explore if the high profile team of ‘Sole Devotion’ would be willing to participate in a Giant sponsored team. ‘Stay True’ had always been the real name of the team, although they had gone by their relevant sponsor name to the rest of us. So Stay True finally became ‘Stay True’, with Giant also enabling them to expand the team – bringing on a youth development arm, recruiting young Adberto and starting a formal women’s team.  Lee cannot speak highly enough of Giant and how they have provided generous funding to the team whilst leaving them “to do their thing”.

Finding love on the bike About three years ago a female cyclist by the name of Alison McCormack caught Lee’s eye. Soon after first sight, Lee was joking to his ‘Stay True’ teammates that Alison was his girlfriend, despite her being unaware that Lee was so eager.

Lee then strategically started doing the Friday morning 5:45am North Road group ride, one of Melbourne’s many weekly bunch rides, and one Alison consistently attended. Lee had traditionally despised any slow bunch ride and the 5:45am Friday morning bunch ride is as slow as it gets, but strangely, Lee found himself riding this bunch weekly until his strategy finally paid off.  2 ½ years later, Lee & Alison are love birds on a bike, sharing their passion and being great contributors to the cycling community.

Along with Lee’s involvement in SKCC he’s also been actively involved in Bicycle Network, recently joining his partner Alison and taking on an official ambassador role. The idea is to promote rides that are designed to get the local community on the bike to improve health and wellbeing, including rides such as ‘3 Peaks’ and ‘Around the Bay in a Day’. He’s also just signed up for the Melbourne Ironman in March 2015 and is preparing himself over the next 10 months for one of the biggest physical challenges in his life.

“It’s all for free”, according to Lee – that’s the social engagement, the mateship and the new and amazing places that cycling takes you. Whilst Lee’s had some good achievements on the bike and rides at an amateur A grade level, it’s not his results that make him our Cyclist of the Month. It’s the combination of his outgoing personality that splashes light and colour on anything he gets involved in as much as it’s the way he embraces community and club activities, giving back to the sport that’s changed his life (and rumour has it he’s recently thrown his hat in the ring for the SKCC Club Presidency role – superb!). Keep up the great work Lee, and all the best with the Melbourne Ironman 2015!

1. Favourite cyclist and why? Alejandro Valverde because he used to have a sweet looking Prince of Spain Pinarello roadbike in 2009.

2. Best ever training tip? You never regret any ride you do. Drag your arse out of bed, as you’ll always be glad you went out. “It’s all for free.”

3. Do’s & Don’ts of cycling Don’t put your helmet (or any cycling item) on a table at a café. Socks must always be two fingers below your calf Sunglasses arms on the outside of helmet straps Matching + immaculate kit. Shaved legs is a given. Be courteous to other road users.

4. Best Cycling Trip – Tour Down Under. It’s easily accessible, which means you’re more likely to get all your friends there and have a great time. It’s both the training and the social aspect that make it great!

5. Best bike you’ve ever ridden – My current bike is the Giant Propel and it’s my all-time favourite. I feel like I’m cheating on it. It cuts through the wind and beats any European bike I’ve purchased in the past. Prince of Spain 2009 was the best looking bike I’ve ever ridden though. Best Wheels – Bora Ultras. Stiff, hard ad fast.