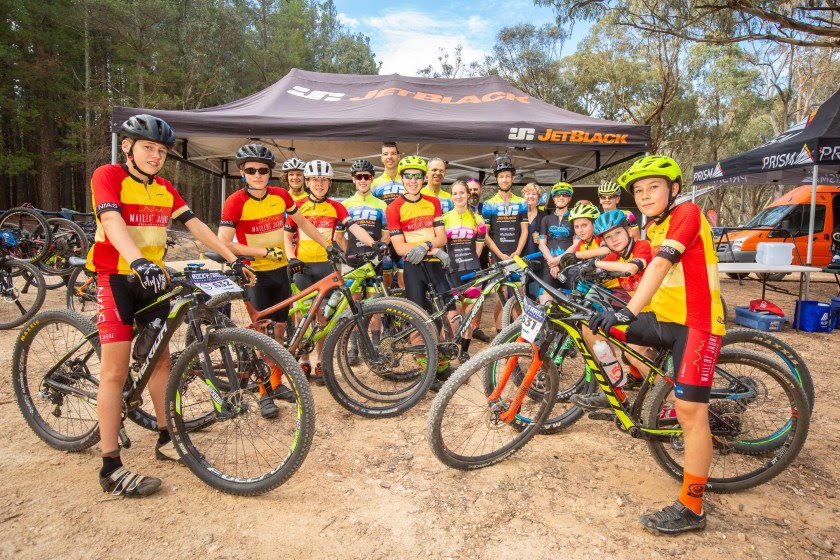 Rocky Trail kicked off their 2020 racing season with a 4 and 7 hour cross-country lap race in Orange on 15 February 2020. Supported by Orange City Council the first Shimano MTB Grand Prix event was held on the original home track of the Orange Mountain Bike Club at Kinross State Forest.

Mountain bikers from all over NSW and the ACT came together in Orange for the event. With more than 20 locals participating in the event especially the first-time Sydney racers were impressed by the caliber of trails available so close to their backyards in regional NSW.

Race Director Bob Morris said that the Orange region had great potential for cycling and mountain biking in particularly. “You have a very strong and energised mountain biking community lead by the Orange Mountain Bike Club”, he said. He explained that the Rocky Trail Entertainment events not only brings visitors into the region but also allowed locals to race their local tracks.

“We always like to encourage the local club riders to join in the action on tracks they have built, tracks they are proud of and tracks they may have the home ground advantage on. It was exciting to see the Orange riders having a go against some of the best in the country”, he said of the competition at Kinross State Forest on the weekend.

Local U18’s club racer Josiah Cooke was one of those who took full home track advantage against competitors his age who came from as far as Tamworth and Sydney. The 15-year old represented the local bike shop and took out the first place in the 4-hour solo juniors race, completing eight laps on the challenging course. Cooke won by over 11 minutes in the junior solo competition.

Another successful club racer was Brett Robertson from Dubbo who finished in first in the over 40’s age group of the 7-hour race. Several pairs won in the teams categories.

Whilst each race is a standalone event, participants are collecting points for an annual series ranking. Ben Fillingham from Sydney was the fastest solo competitors in the four hour event. Fillingham completed 10 laps in 4:14:43 and the team line-honours went to Fillingham’s team mates Luke Brame and Scott Reynolds, who just shy of 2 minutes ahead of him. The fastest female was Elise Buriss from Canberra with 7 laps in.

The fastest male lap time of 22:42 min on the 8km course was clocked in by Sydney’s Jon Odams who put over 40 seconds into Fillingham on the first lap. Odams unfortunately had a mechanical and finished the race on 7 laps. The fastest female lap time went to local racer Janet Martin in 31:15 min.

The Bathurst racing team of Daniel Watson and Jarrod Bell took out the line-honours in the 7-hour endurance event with 17 laps in 7:27:28. Michael Sherwood was the fastest 7-hour solo racer outright, completing 14 laps in 7:10:35 and Canberra’s Gwynn McLeod took out the female outright title with 12 laps 7:18:45. The Rocky Trail Women’s Ambassador spectacularly finished the 7-hour race in 9th overall.

Impressively one of the three Northern Inland Academy of Sport (NIAS) pairs junior racing teams out of Tamworth finished in fourth outright in the 7-hour event. Part of a program, which aims to provide greater opportunities for their region’s talented athletes. Their spokes person Michael Crummy said that the GP in Orange was the first event for the team and that the juniors had caught the Rocky Trail racing bug.

Under the patronage of naming right sponsor Shimano Cycling Australia there will be plenty of racing opportunities coming up as the 2020 Shimano MTB GP series events in NSW will include eight more races until the end of November: Southern Highlands, Kempsey, Port Macquarie, Newcastle, Nowra, Central Coast, Hunter, and Canberra. One more event has already been confirmed in Queensland: Rocky Trail has announced that it will resurrect the infamous “Hot Rock Race” in Townsville in September this year.

For more information and a line-up of dates and venues, visit the event website at rockytrailentertainment.com/shimano-mtb-grand-prix/