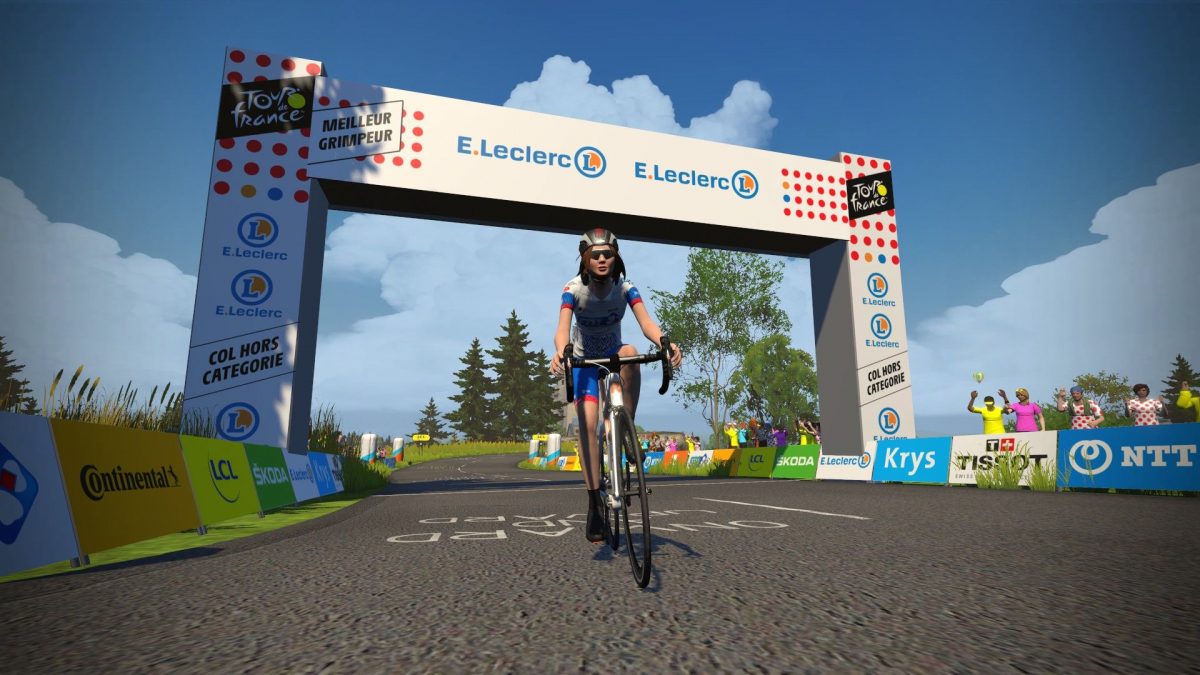 This weekend seen the running of stages 5 and 6 of the Zwift virtual Tour de France 2020. 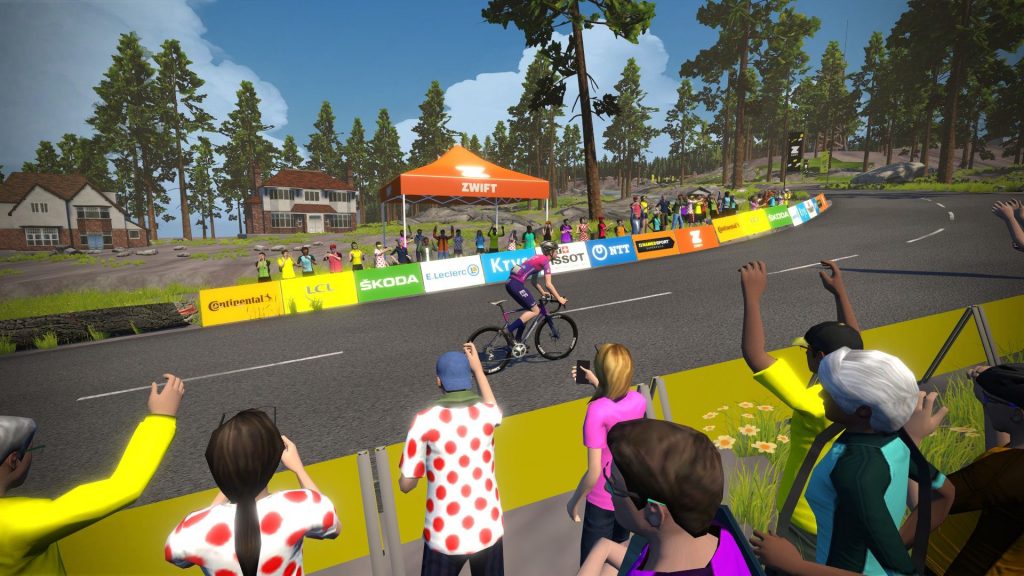 France’s TDF 2020 Queen, 18th July 2020 – stage 5 was the queen stage of the Zwift Virtual Tour de France and she did not disappoint. The 22.9km stage that took to the virtual slopes of Mont Ventoux shredded both pelotons with 1,205m of elevation to climb to reach the finish line at Chalet Reynard. Both GC leading teams went in guns blazing letting everyone know they were serious about staying in yellow going into the final stage on the Champs-Élysées tomorrow.

Up first was the women’s race that saw some strong attacks early on from Brodie Chapman (FDJ Nouvelle – Aquitaine Futuroscope) to take the first QOM mid-way through the race and some aggressive racing from Danielle Christmas (Lotto-Soudal Ladies). Even as the peloton was whittled down on the infamous mountain slopes, losing the likes of Kasia Niewiadoma (Canyon//SRAM Racing) and Lizzie Deignan (Trek-Segafredo) early on, Tibco-Silicon Valley Bank made sure their riders remained at the front of the race to maximise GC points. Although in the final few kilometers Ashleigh Moolman-Pasio (CCC-Liv) was too strong for yellow jersey wearer Sarah Gigante (Tibco-Silicon Valley Bank) to hold on, the Tibco-Silicon Valley Bank team placed their riders 2nd, 3rd, 4th and 5th securing the yellow jersey classification ahead of tomorrow’s final stage. Gigante and Moolman-Pasio battled it out between them until Moolman-Pasio’s accelerations became too much with her passing the 1km banner with a 19 second lead over Gigante. With today’s placings Drops Cycling have lost their lead in the polkadot jersey rankings to Tibco-Silicon Valley Bank who will take the race classification due to no QOM points on tomorrow’s stage. Whilst Canyon//SRAM Racing still hold the green and now also the white jersey classifications. 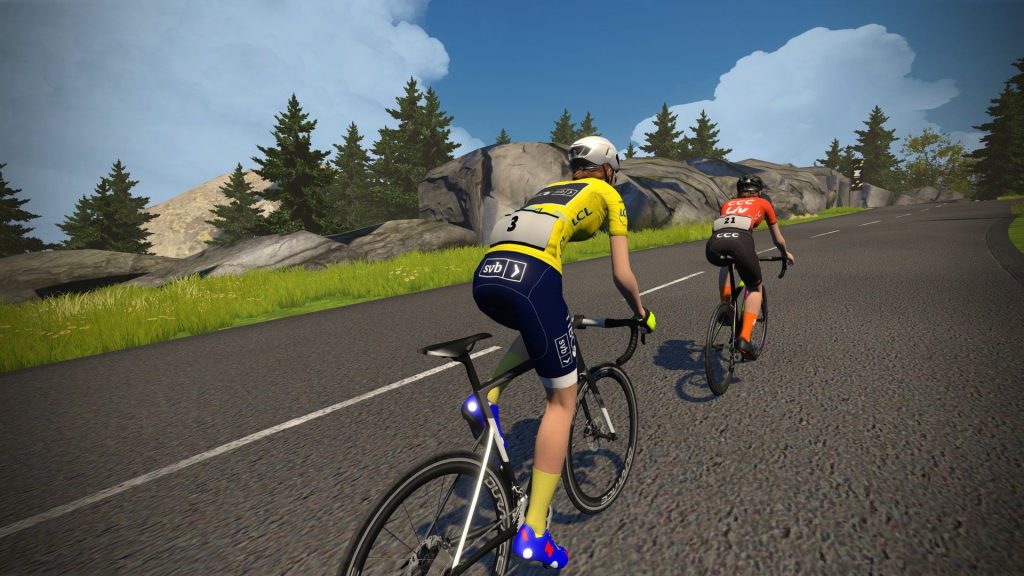 The men’s race played out in similar vein to the women’s losing some big names early on such as Julian Alaphilippe (Deceuninck – Quick-Step), Rohan Dennis (Team Ineos) and Warren Barguil (Team Arkea – Samsic). Jonas Rickaert (Alpecin – Fenix) took the mid-way KOM but it was NTT Pro Cycling Team that showed they were serious about staying in yellow. With Mike Woods (EF Pro Cycling) pushing the pace at the front of the race a small group of 5 riders was soon whittled down to three, Woods, Louis Meintjes (NTT Pro Cycling Team) and his teammate Domenico Pozzovivo. Around 4km to go Pozzovivo attacked, leaving Woods having to chase to get back on, which he did. The acceleration, too much for Meintjes, left him gapped with 3.9km to go as Woods and Pozzovivo battled against each other. At 3.5km to go Pozzovivo started to lose Woods’ wheel and by the 1km banner Woods had 15 seconds on his chaser, going on to take the win. Like Tibco-Silicon Valley Bank, NTT Pro Cycling Team took an impressive number of points on the line placing 2nd, 3rd, 4th and 7th meaning they will take the GC classification of the race. They now also hold the polkadot, green and white jerseys going into the final stage. 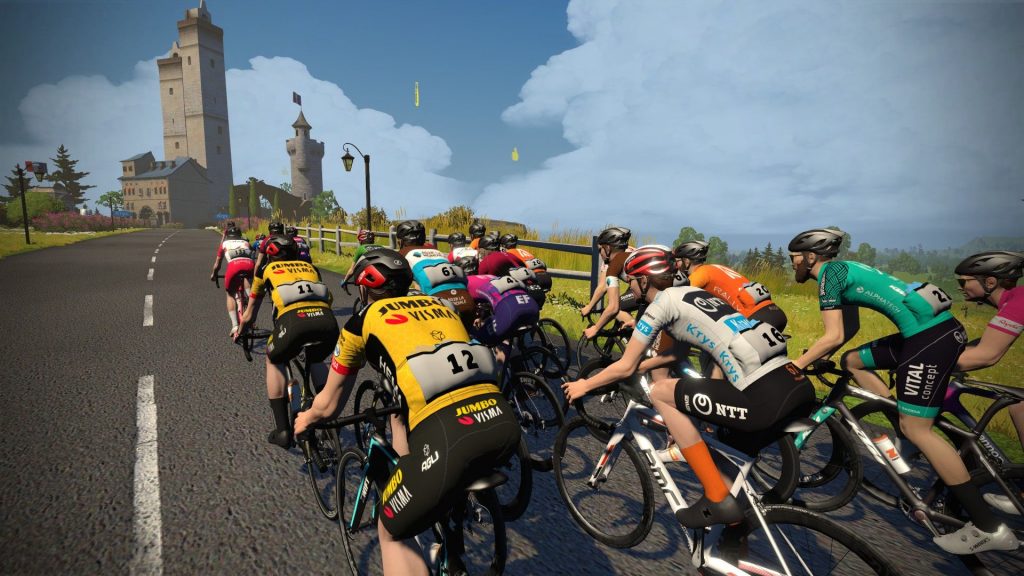 The most combative riders of the day were Danielle Christmas (Lotto Soudal Ladies) and Mike Woods (EF Pro Cycling).

“I have a lot of appreciation for Zwift and their push to give women’s cycling a platform and do everything they can to make it equal, equal racing, equal exposure, it’s really great to have brands like Zwift, really forward thinking brands that are really pushing women’s cycling forward, because when we’re given the platform there’s no doubt that there’s an appetite to watch our racing, so hats off to all involved and thanks for this great opportunity.”

“Zwift racing is a lot more of a sustained effort, I think that’s one of the reasons why I have success at it because it is quite similar to running, I know Freddy Ovett mentioned this a few days ago and had a bit of a tiff with JV, my team boss, but I actually agree with my team boss that it is a lot more similar to running and just a harder, higher sustained effort for a longer period of time, and I could stand basically the entire time on the trainer because you don’t have to worry about the aerodynamics, if you saw me on the video I was standing the entire time and was just able to basically run my way on the bike.” 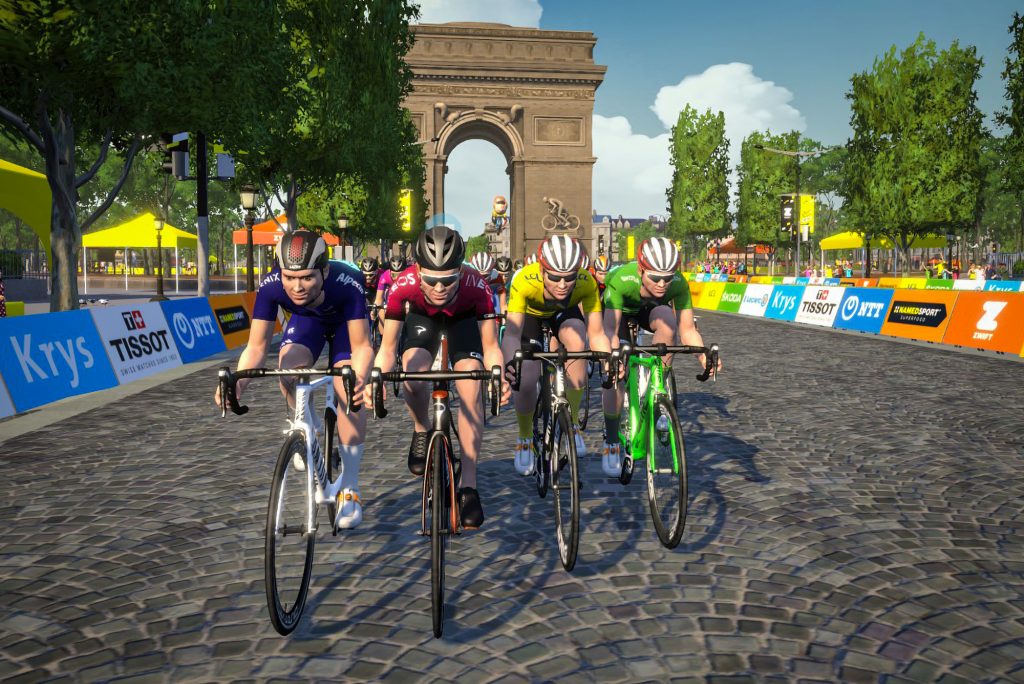 The sixth stage saw the grand finale after a third weekend of racing draw this historic event to a close, and just as we usually see on the final stage of the real Tour de France, the virtual Champs-Élysées saw the pace gradually wind up with each lap, as teams prepared themselves for a rapid sprint finish after 42.8km of racing. With six intermediate sprints during the race there was still the possibility for teams in the women’s peloton to challenge Canyon//SRAM for the green jersey, which TIBCO-Silicon Valley Bank successfully managed. 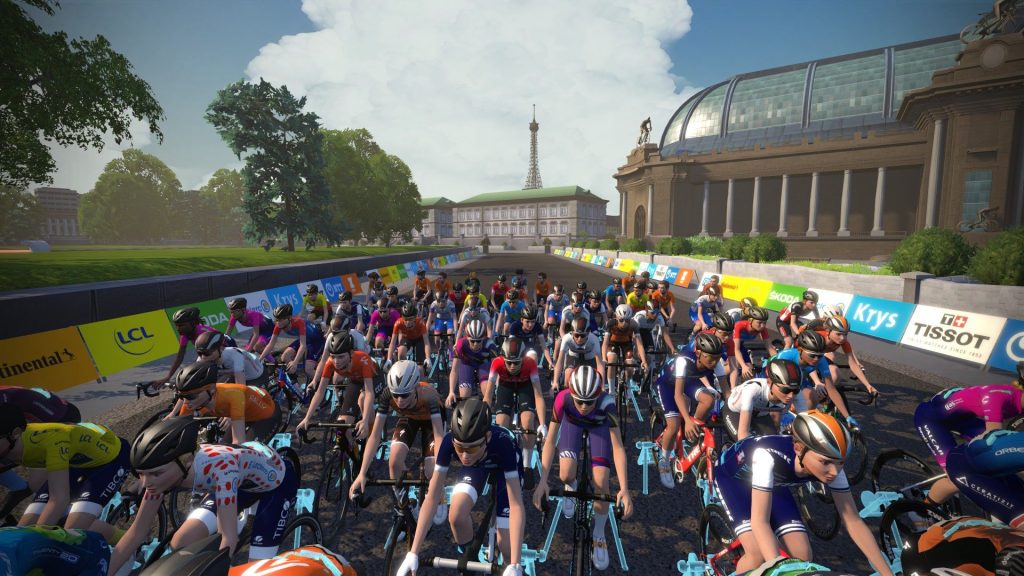 The women’s race saw a collage of pained faces on their home video links as the pace set out high from the start and increased with each lap, causing some big names to fall out the lead group early on; sprint hopefuls Marta Bastianelli, Jolien D’Hoore and Tanya Erath along with Marianne Vos didn’t make it to the finish with the front group down to a mix of unable to hold the pace or technical mechanicals. With each lap TIBCO-Silicon Valley Bank put in an acceleration with the aim to continuously whittle the group of lead riders down. With 1.6km to go a group of 23 riders were storming down towards the home straight. With only a few hundred meters to go Ellen van Dijk (Trek-Segafredo) opened up the sprint with all riders engaging their power ups in unison. Yellow jersey wearer Lauren Stephens (TIBCO-Silicon Valley Bank) timed hers to perfection with the help of her team manager Racheal Hedderman, to cross the finish line first, helping secure nearly a clean sweep of all classification jerseys; high-fives between the pair demonstrating what taking the overall win meant to the team. TIBCO-Silicon Valley Bank took every jersey classification bar the young rider jersey which was won by Canyon//SRAM Racing. 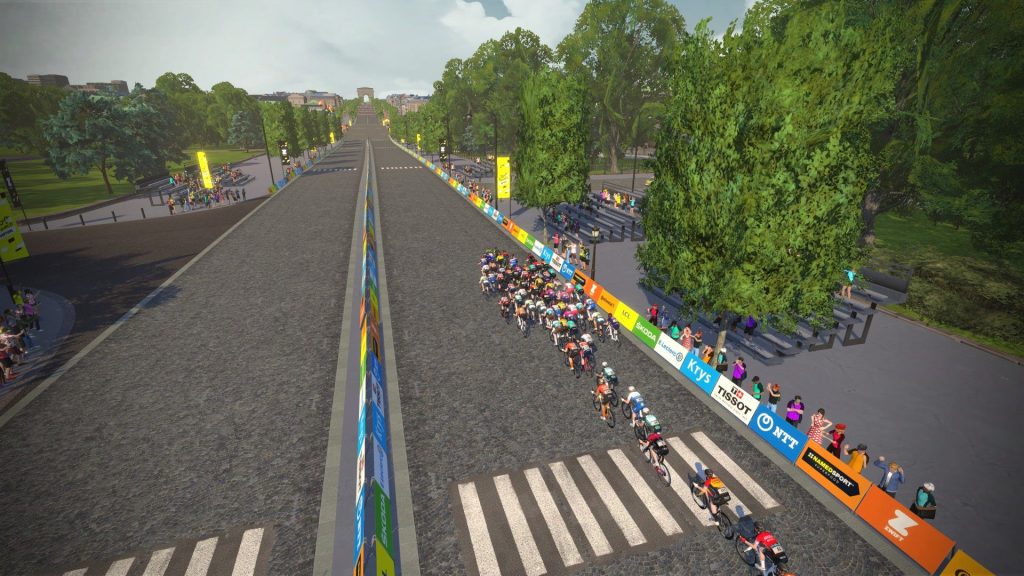 NTT Pro Cycling Team pretty much mirrored the success of Tibco-Silicon Valley Bank by taking all jersey classifications, but on the day they didn’t quite time the sprint right. By midway through the race over half the peloton had been distanced from the front group including Chris Froome (Team Ineos), Elia Viviani (Cofidis) and the entire Deceuninck – Quick-Step team. With a kilometer to go Groupama – FDJ riders, Benjamin Thomas and Bruno Armirail attacked off the front but we caught with 400m to go. Ryan Gibbons (NTT Pro Cycling Team), who was wearing the yellow jersey, looked like he was going to take the win until just a few meters to go when Will Clarke (Trek-Segafredo) came through to take the win, producing another stage victory for his team. NTT Pro Cycling Team still happily basked in their incredible success of this Virtual Tour de France as team manager Doug Ryder addressed the post-race interview with a fully charged glass of champagne in hand.

The most combative riders of the day were Marianne Vos (CCC – Liv) and Luke Durbridge (Mitchelton – Scott).

“It’s been an incredible race winning the yellow jersey as a team and then winning the final stage was more than what we expected coming into this first ever women’s Zwift Virtual Tour de France.”

“We came into the stage today focused on taking the green jersey as we knew we were going to keep the yellow jersey so we made a plan to go for the green jersey and I think a hard controlled race is the best for our team and that’s what we did today.”

“As far as Zwift racing goes this is the most prestigious race so far so it’s a nice way to finish the Tour for our team getting another stage win, it’s been a good experience and good exposure.”

“I had an invisible power up early so I got rid of that one and then on the second or third lap I had the power up sprint so I kept that in the pocket until the end. Last week I also had a power up but I engaged it too early, at around 450 meters to go, so this week I went later but when you’re sitting at around 500watts it’s not easy to hit the remote to activate it, but I managed to do it today.” 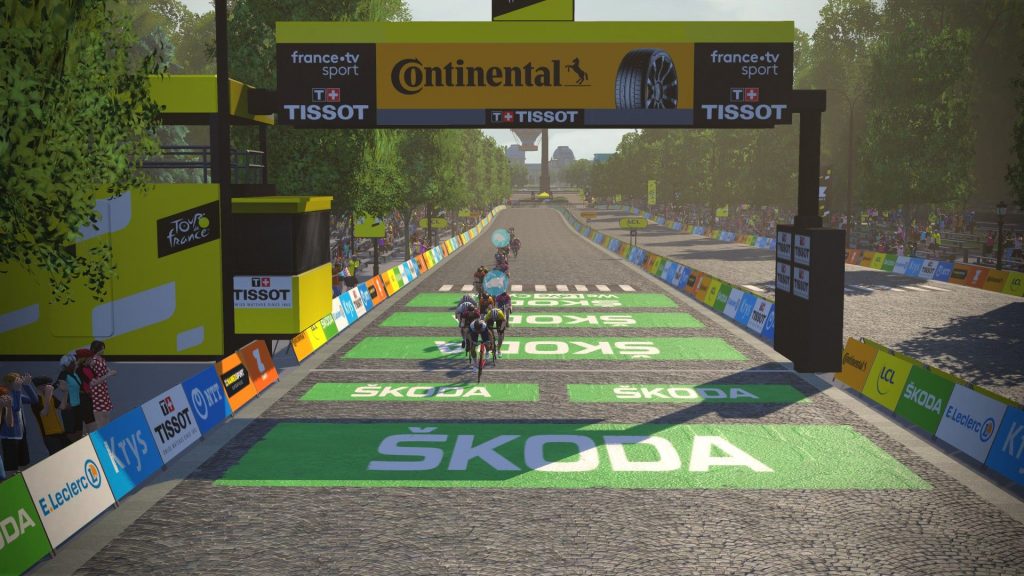 “It’s been a lot of fun but it’s been hard work trying to coordinate it all, if nothing else just due to the timezones. We’ve had riders racing at four in the morning and 11 at night, but the riders fully all bought into the idea and were committed to racing so we made sure coming in that we all communicated in the week leading up to each of the races and building a plan together and then on race day we’re also communicating together really well and that communication is what has been key.

“It’s been absolutely brilliant. It’s been an amazing opportunity for us to engage with this platform, and to win the first ever Zwift Virtual Tour de France has been great. We’ve put a lot of hard work into this, NTT has also put a lot of effort into this showing all the analytics and data that you can see on screen which brings the fan base closer to the riders more than ever. For Zwift to have this platform to be able to run the race on has been something that we’ve been really excited to be a part of.”

“We’ll be having a bit of a celebration this evening, there has been a lot of support between the riders, today they came back from a six hour ride on our training camp here in Tuscany and they all wanted to support the final four in this final stage on this Zwift Virtual Tour de France which just shows our unity and how this team has come together. We’re now really looking forward to pinning numbers on our jerseys and getting back out there in the real Tour de France and other races and getting close to our fan base again.”